The purpose of the CAW Climate Champion Award is to recognize local leaders who put climate-related research and outreach to work, often in conjunction with CAW members. Since 2015, CAW has recognized one or two award winners each year at the NH Coastal Climate Summit. This page serves as an archive highlighting the Climate Champion award winners over time. 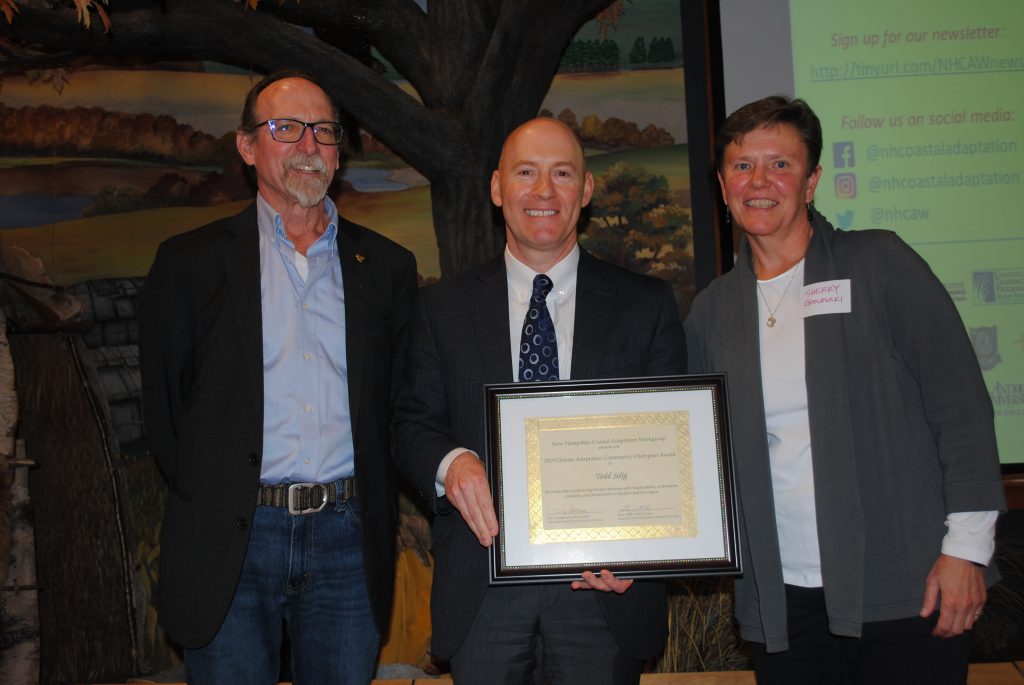 While Durham prides itself with being a progressive community and one that is unafraid of being first, Todd finds value in identifying and evaluating other climate-resilience projects in surrounding communities, or in other parts of the country, and how they can be adapted in Durham. He makes it a point to stay up to date with ever changing climate science by reading scientific reports and assessments, following national news coverage and reporting, and attending CAW sponsored workshops and conferences. Todd is always on the look-out for new information and how it can be used to advise the public and local decision-makers to influence change.

Todd has volunteered his time to present Durham’s climate change initiatives at workshops and conferences and has written several opinion pieces that have been shared in local and national daily newspapers. He summarizes ongoing climate related projects to Durham’s Leadership Team, Town Council, and other various boards and commissions he interacts with. Todd understands the importance of providing education to the public and promotes the use of the Town’s weekly Friday Updates, Twitter, and Facebook presence to keep residents informed on both regional and local resilience efforts.

Todd has been actively involved in several resilience projects, including: oversight on the development of the energy and natural resource chapters of the master plan, installation of climate art signs, completion of a sea-level rise vulnerability assessment, update to the town’s hazard mitigation plan, adoption of more stringent floodplain regulations and the state’s first use of advisory zones for sea-level rise, and the construction of a living shoreline at Wagon Hill. He has also advocated for two upcoming projects that include a groundwater modeling study and the creation of a standalone climate adaptation master plan chapter.

Many of the climate-related efforts Todd has supported go well beyond his professional scope of work as town administrator and emergency management director, including his participation in the climate in the classroom series, climate remembrance project, and yearly King Tide photo contest.

Todd’s role as town administrator and emergency management director allow him to work directly with other local government staff on a variety of regional issues including transportation, housing, water resource protection, and climate adaptation planning. Many of the efforts Durham has undertaken can be used as a model for other communities to replicate. 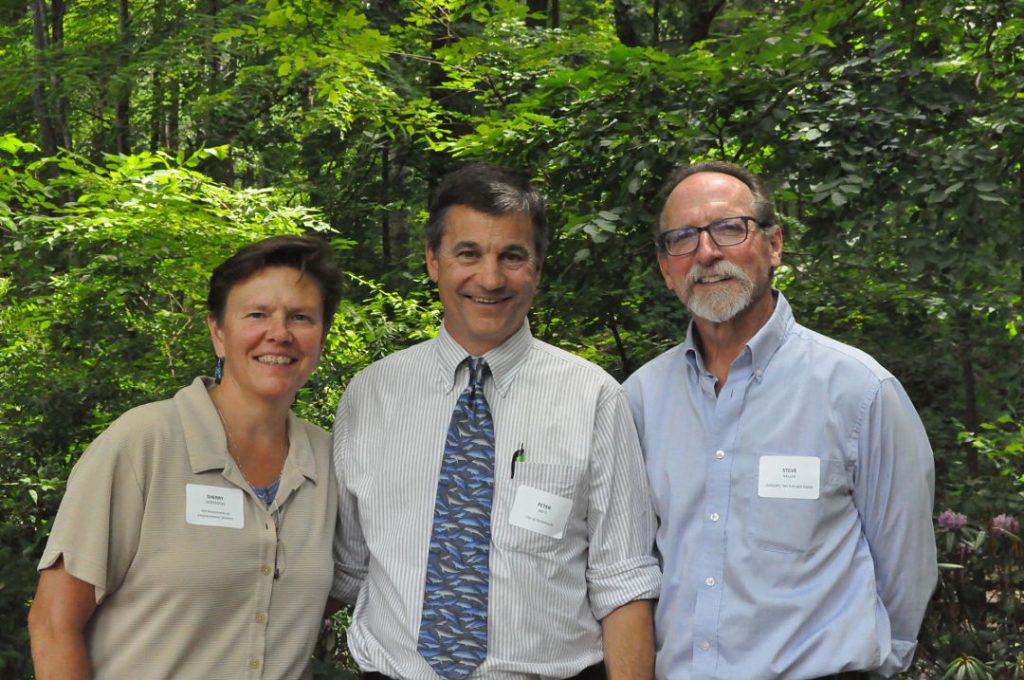 Peter is Portsmouth’s Environmental Planner and Sustainability Coordinator. He is also an indispensable member of CAW who helps keep the municipal perspective front and center in the work that CAW does. A review of Peter’s “climate champion” creds is a textbook case. Does he keep informed about climate related community resilience? Check. Does he inform or engage others? Check. Does he take actions that advance climate resilience research, outreach, planning, policy, regulation, or practice? Check, check, check. Some might argue that these efforts are all part of Peter’s job, and they are; however, there’s evidence that Peter goes above and beyond those official responsibilities. It’s said that cities are leading the way with climate adaptation, and Portsmouth, with Peter’s help, is an example of that.

Peter consistently heightens CAW members’ awareness of what many New England coastal communities face – development pressure, historic legacies, cultural attractions, natural resource pockets, a commitment to local control, and people with diverse interests. With all these interests, it’s fortunate that Peter is a collaborator – whether working with researchers, meeting with City Council, or leading residents on a sea-level rise walking tour.

Peter has applied for and received several grants to fund adaptation work in Portsmouth – including the Portsmouth Coastal Resilience Initiative and a Historic Vulnerability Assessment. Peter recognizes the role that natural resource protection plays in providing a foundation for resilience, and he acts on it by updating and improving city ordinances, initiating a vernal pool study, and leading the Public Undeveloped Lands Assessment. As noted in his nomination for this award, “Peter is always looking for innovative ways to build resilience and improve the quality of life for Portsmouth residents.” We applaud all he has accomplished for that goal. 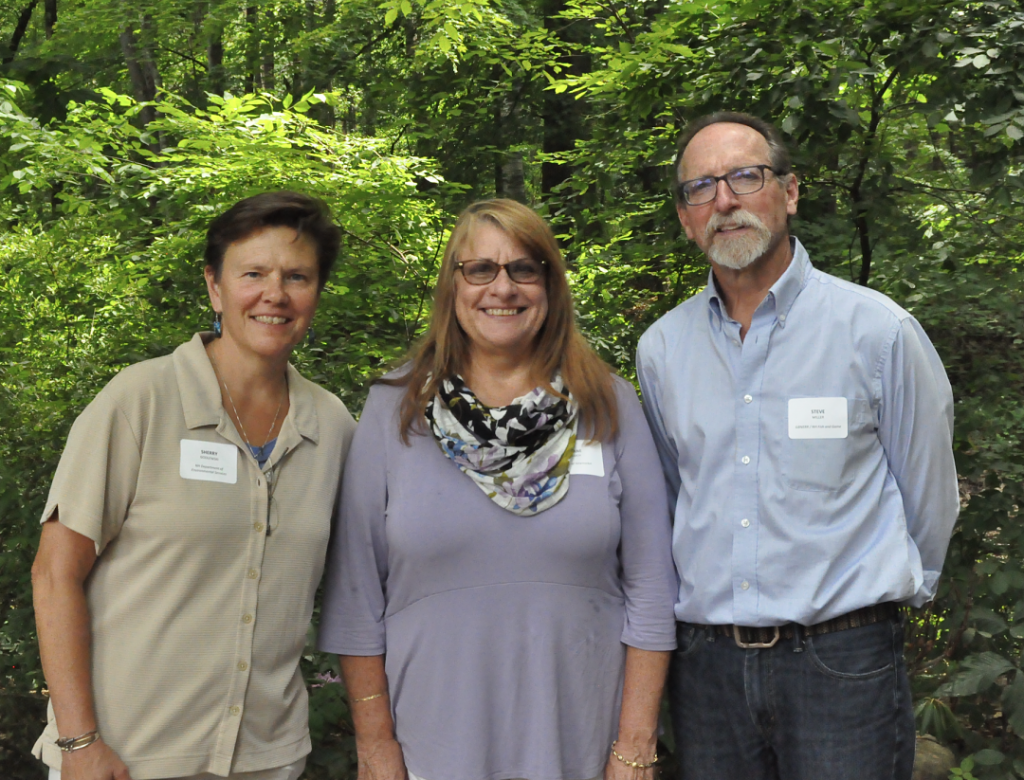 Diane is Newmarket’s town planner and acts as the Planning Department’s representative to the Planning Board and Zoning Board of Adjustment. Diane’s climate adaptation efforts resemble a mosaic of activities that have resulted in a striking montage of resilience planning for Newmarket. Over the past several years, Diane has been involved in:

Recently, Diane worked to include projected coastal flooding due to sea-level rise in the town’s 2018 Hazard Mitigation Plan and revise the town’s stormwater regulations. She also was involved with a modeling study to investigate the potential vulnerability of public drinking water supplies to groundwater rise and saltwater intrusion.

Aside from these specific initiatives, Diane’s contributions have had a much wider impact. She keeps municipal board members and Newmarket residents apprised of climate projects going on in town and has contributed to regional projects, such as serving on an advisory committee for a floodplain study for the Lamprey River. Many of the projects that Newmarket has undertaken can serve as a model for other coastal communities. Diane is widely recognized as a regional leader in identifying climate-related challenges and embracing innovative solutions to reduce risk. Her level of detail, enthusiasm, and commitment to achieving Newmarket’s vision and resilience goals are a source of admiration and respect.

Colleagues at the Strafford Regional Planning Commission describe Diane as someone who demonstrates “what it means to be a responsible and successful planner”; “maintains a professional standard, even during difficult and often complicated discussions”; and exhibits “the uncanny ability to get things done,” despite hurdles. 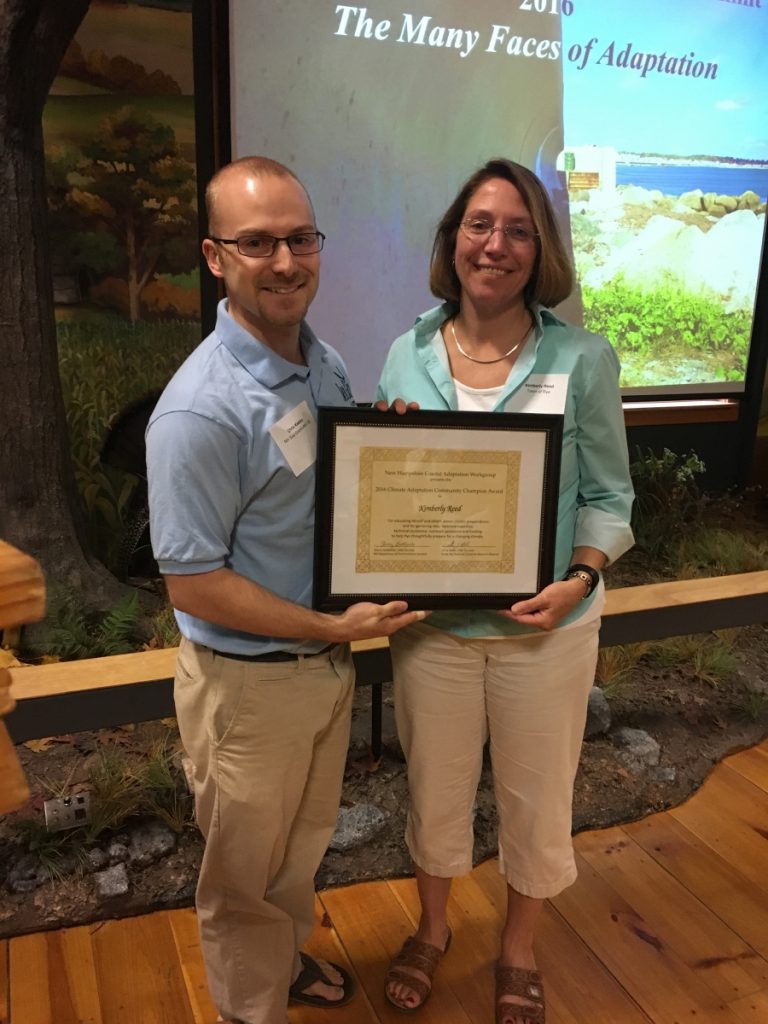 The individual who nominated Kim Reed for the award noted that, “[Reed] is a true climate champion for the Town of Rye. Her professional work in climate change planning and adaptation is driven by her personal interest in the topic and strong belief that her community needs to be proactive in its approach to protect its coastal assets and resources.”

Reed has supported many local climate projects over the years, including:

Her nomination was supported by strong letters of recommendation:

As evidence of her ability to catalyze action, one peer describes her as “the spark plug in the Town of Rye in bringing recognition to the need for climate adaptation action.

As evidence of her dedication, another peer writes, “She simply does not give up. When she encounters a challenge, she digs in harder and persists until an answer is found.”

As evidence of her success, a colleague writes, “We are now seeing that work pay dividends as the information finds its way into town planning documents.”

In summary, Reed “catalyzes action, she is dedicated, and she has shown success. She serves as a FEMA Certified Floodplain Manager, assistant Emergency Management Director, and the Planning and Zoning Administrator for the Town of Rye.”

As a professional planner, Sylvia’s efforts to advance climate preparedness in Exeter went above and beyond the requirements of her job. She has been a frequent attendee at CAW workshops and has made a point of learning what is going on in other seacoast communities related to climate preparedness in order to serve the community where she works. Sylvia regularly draws from her planning, civil engineering, and landscape architecture backgrounds to contribute to the education of others at events, sponsored or hosted by CAW members. She was instrumental in getting Exeter involved in the Climate Adaptation Plan for Exeter or CAPE project and has assisted with transferring that project model to Rhode Island and Delaware. Perhaps most importantly, Sylvia is known for keeping project partners grounded and attentive to what matters most in a community.

Sylvia voluntarily agreed to participate in the CAPE project, which was a “huge undertaking that added to her work load and responsibilities, doing so because she knew it would help Exeter.”

Jay has been working to advance climate preparedness for years. He is a frequent attendee at CAW workshops and in 2011 worked with three towns on one of the region’s first climate adaptation projects. That project used an economic impact model to examine local effects of sea-level rise and storm surge. In 2014, Jay rolled up his sleeves with other community members participating in the Preparing for Climate Change program, serving as a steering committee leader to guide a workshop series for the towns of Hampton, Hampton Falls, and Seabrook. He is a founder of the Seabrook-Hamptons Estuary Alliance, a three-town working group that unites the estuary’s towns on watershed challenges like climate change. And, even before founding the Seabrook Hampton Estuary Alliance, Jay served on the board and as chair of the Great Bay Stewards, where he encouraged the Stewards to invest and participate in climate related activities. Jay also served on a climate panel convened by Senator Jeanne Shaheen.

Jay “is competent, reliable, unflappable in the face of state and municipal bureaucracy, and just a nice guy to work with who wants to see good things happen in the region.”

New Redfin survey shows 49% of people looking to move in the next year are factoring natural disasters and climate change into their decision. https://www.redfin.com/news/climate-change-migration-survey/