What makes a shoreline resilient? Creative strategies for Great Bay

Flooding, erosion and other climate impacts are affecting NH’s coastal towns in different ways, and the strategies for increasing resilience will look different too. Despite these differences, there is a lot to be gained by sharing ideas across towns, visiting projects in progress, and looking for new partnerships.

At each site, we talked about the unique flooding risks at that location and then explored strategies for making our shorelines more resilient, including ideas for built and natural infrastructure and community engagement. Multiple issues contribute to coastal flooding, including rising sea levels, rising groundwater, and increasingly intense storms, and often these factors combine to create events like the infamous spring floods of 2006 and 2007. Urbanized shorelines are especially vulnerable because they have limited space that can be used to capture flood waters and buffer towns during big storms; however, Dover has found some creative solutions. 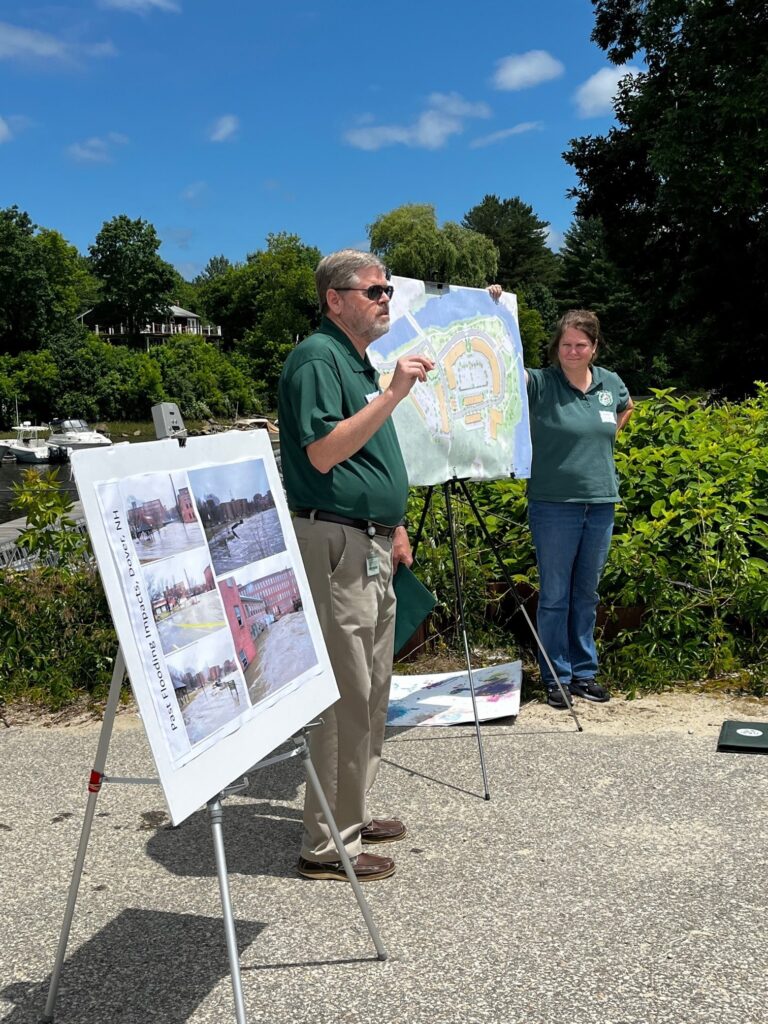 During the tour, public works and planning department staff members Gretchen Young and Steve Bird explained how Dover is implementing new stormwater management strategies around Henry Law Park and re-envisioning their downtown waterfront along the Cocheco River. After years of planning, the city is poised to extend their popular riverfront park and build a new multi-use development at the end of River Street. The new buildings will be elevated to reduce flood risks and the shoreline will include a number of nature-based stabilization techniques. (Draft plans are included here.)

Durham is also finding ways to restore natural processes along their waterfront. Town Engineer April Talon and Pete Walker from VHB explained plans for removing the Mill Pond Dam and actively restoring the Oyster River channel. Kim Arlen and Brianna Group from the Nature Conservancy introduced the Community Oyster Garden, which was initiated at Town Landing Park in 2021 as a way to involve the public in oyster restoration. Representatives from Newmarket, Portsmouth and Dover expressed interest in also hosting community oyster gardens. 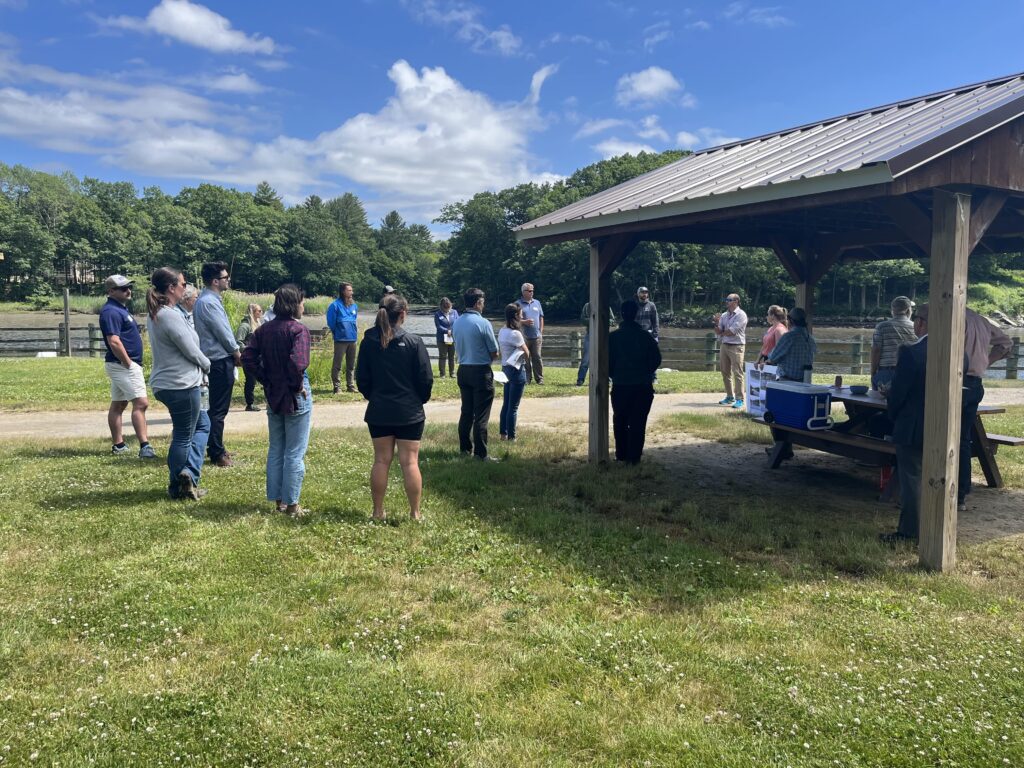 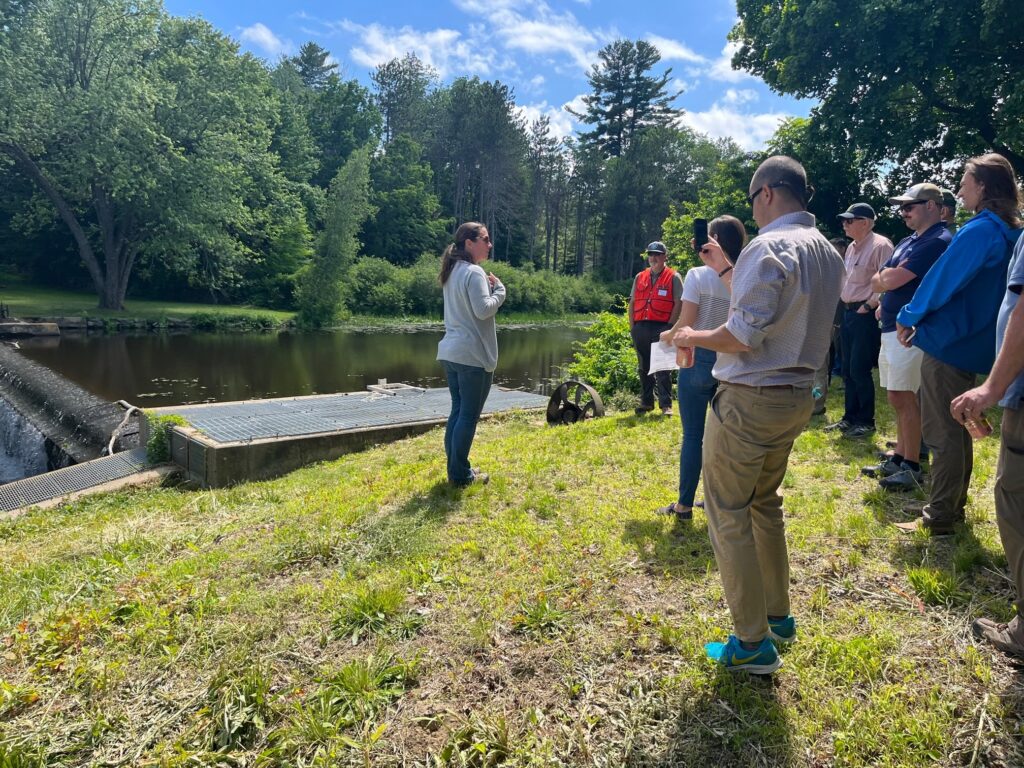 Building support for resilience strategies requires that communities have some awareness of climate risks. During the tour, we also talked about creative strategies for engaging the public. For example, the Climate Remembrance project is a unique public art installation that was developed to raise awareness about climate change impacts in Durham.

Rising seas are also affecting the natural areas along our shorelines. While visiting the Lubberland Creek Preserve as part of the tour, Rachel Stevens from the Great Bay NERR explained that some salt marshes may not be able to keep up with sea level rise and will slowly convert to mudflats, which could leave some shorelines vulnerable to further erosion. Efforts are underway to help salt marshes adapt and migrate inland when possible.

One strategy is to address barriers to natural tidal flows, for example, by enabling tidal waters to flow more easily under roads. Joanne Glode from the Nature Conservancy toured us around one shining example of a culvert improvement project. In 2019, the Lubberland Creek Culvert was expanded from a 3 x 4 foot pipe running under Bay Road to a 9 x 16 foot opening that allows for the free flow of river water, tidal water, wildlife and – over time – salt marsh plants. Before the upgrade, the undersized culvert caused the road (an important evacuation route for the town) to flood and inhibited passage of migratory fish like the American eel. 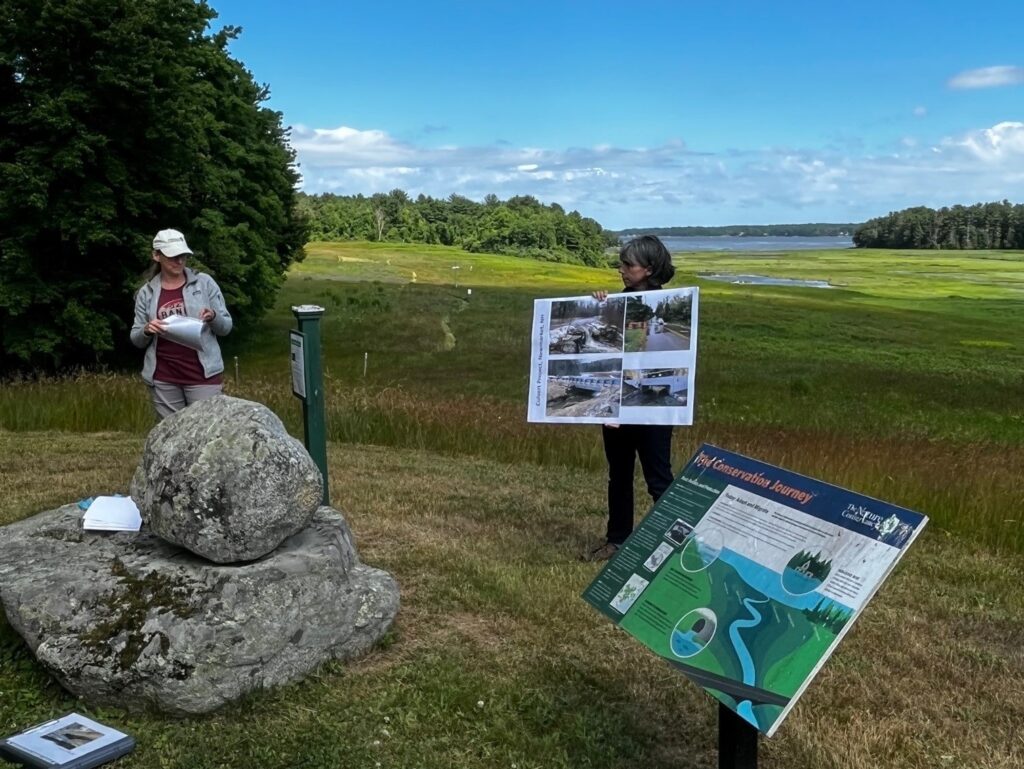 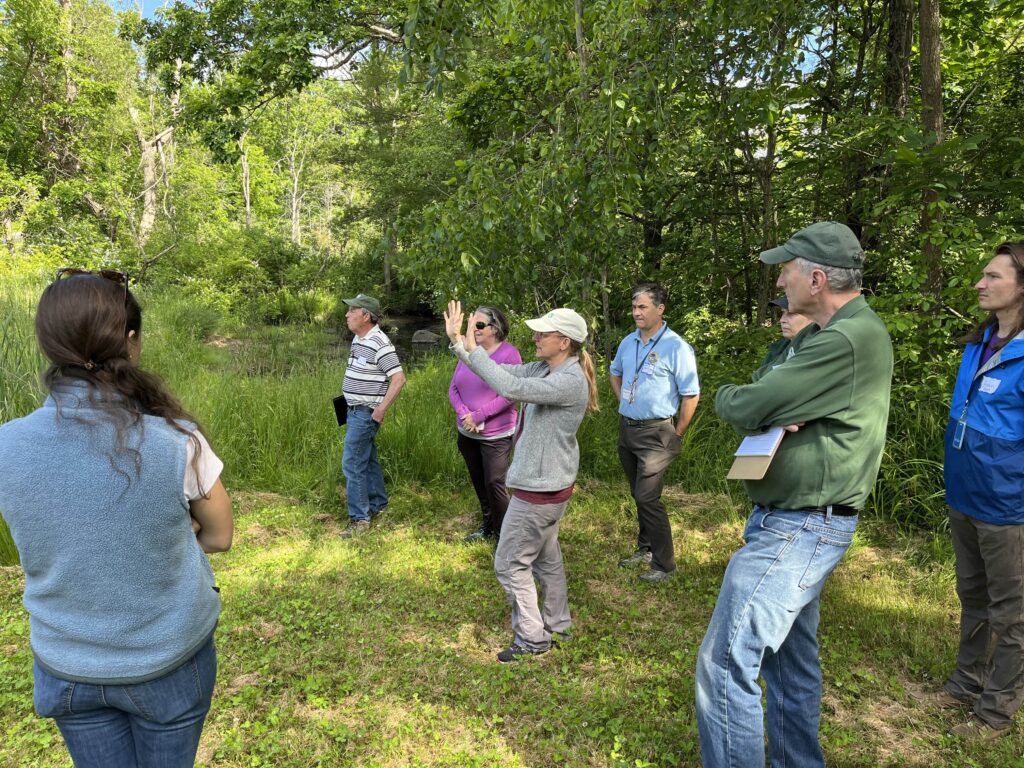 Not surprisingly, each of the communities we visited are implementing strategies customized for their landscape, but a few common themes emerged from the day. For example, collaborations across sectors and public support are essential, there are a variety of locally developed tools to guide decisions, and patience and many conversations are needed to refine plans in consultations with all the parties that fund and permit shoreline projects.

In preparation for the tour, we put together two resources that others might also find helpful.

Let us know if you have ideas for future work or events related to shoreline management, we are always looking for new ways to bring people together and spark learning.