We got out just in the nick of time—right before NHDOT closed the roads as winter storm Riley’s angry tides swallowed them up (temporarily). Our attempt to capture time lapse imagery of the coastal flooding in Hampton, New Hampshire was underway and success hinged on the strength of the few zip ties that secured a GoPro camera to a front porch.

Following a devastating 2017 Atlantic hurricane season that wreaked havoc throughout the Caribbean and southeastern U.S., early 2018 has been marked by back-to-back (-to-back-to-back…) nor’easters here in New Hampshire. Most notable among the winter storms were the two that coincided with full moon high tides: the icy January 4 Nor’easter named “Grayson” and the windy March 2-5 Nor’easter named “Riley.”

Depending on whom you ask, some say Grayson was worse and others swear Riley hit the hardest. Both storms caused moderate flooding and a number of local and state road closures, including sections of Route 1A which spans the NH coastline. Grayson won the prize for highest water levels, registering 13.24 feet at the Hampton, NH tide gauge and resulting in some severe back marsh flooding that caused at least one homeowner to lose an $11,000 HVAC system and temporarily trapped some staff at the Hampton Police and Fire Station in their flooded parking lot. Riley came with slightly lower water levels (the Hampton tide gauge registered 12.79 feet), but packed the windiest and waviest punch, resulting in greater impacts to the exposed Atlantic Coast. Riley also had impressive stamina, causing flooding during not just one but EIGHT high tide cycles over four days. Riley’s destruction is still being tallied but it included damage to the protective berm and wall along Route 1A through Rye down to Hampton, State Park and Beach facilities, and private property.

So what’s up with these storms? We’ve heard from folks with good memories that they haven’t seen anything as bad as these storms since 2013 Winter Storm Nemo or the Blizzard of 1978 or (insert your favorite historical storm event here). While we aren’t trying to compare these storms to past events, we are interested in understanding whether any patterns exist here. Is it actually weird to experience multiple big storm events in one winter? Is it normal? Or is it a new normal?

“Five of the past six winters have brought persistent cold to the eastern U.S. and warm, dry conditions to the West, while the Arctic has been off-the-charts warm,” said Dr. Jennifer Francis of Rutgers University and co-author on the research. “Our study suggests that this is no coincidence. Exactly how much the Arctic contributed to the severity or persistence of the pattern is still hard to pin down, but it’s becoming very difficult to believe they are unrelated.” 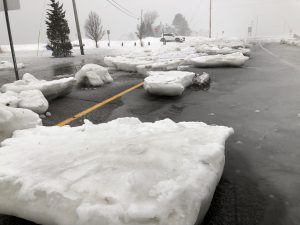 While powerful wintertime nor’easters may be increasingly frequent, they represent only one piece in New Hampshire’s coastal flooding puzzle. A National Oceanic and Atmospheric Administration (NOAA) report published in February 2018 finds that minor coastal flooding, which is also commonly referred to as “high tide,” “nuisance,” or (our favorite) “sunny day” flooding is becoming more frequent at NOAA tide gauges in the Northeast thanks to sea-level rise. Though New Hampshire’s Fort Point and Hampton tide gauges did not have enough historical data to be included in the report, the findings indicate that between 2000 and 2015, annual high tide flooding frequency increased by 75% along the Northeast Atlantic from an average of 3.4 days to 6 days per year. Furthermore, the report predicts that high tide flood frequencies in the Northeast Atlantic will continue to increase rapidly as a result of sea-level rise.  Depending on the sea-level rise scenario, high tide flooding along the Northeast Atlantic is expected to occur between 45 to 130 days per year by 2050 and at least every other day (182 days per year), if not every day (365 days per year), by 2100. This finding is further confirmed by research released in March 2018 by Dr. Jennifer Jacobs et al. the University of New Hampshire which found that there was a 90% average increase in nuisance flooding along the East Coast when comparing 1996-2005 and 2006-2015.

Thanks to the collaborative efforts of several regional partners, the tide gauge in Hampton Harbor, NH is equipped with a coastal flooding prediction system which can forecast water levels and potential flooding in and around the towns of Hampton, Hampton Falls, and Seabrook 2-3 days into the future. The National Weather Service (NWS) has established three coastal flood severity thresholds: minor (more disruptive than damaging), moderate (damaging), or major (destructive). Water levels peaked at 13.24’ during Grayson (pictured left) and 12.79’ during Riley (pictured right), resulting in major and moderate flooding, respectively. 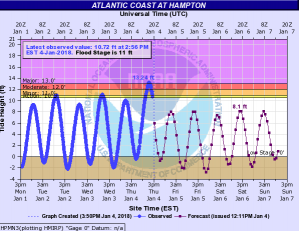 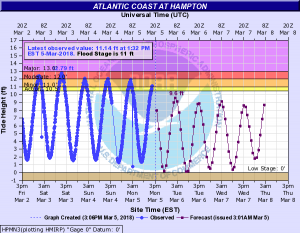 Despite lacking long-term historical tide gauge data, Hampton, NH is no stranger to frequent high tide flooding. At a 2017 Select Board meeting to debate flood-related warrant articles, Town Manager Fred Welch stated that, based on the tide charts, he calculated a total of at least 49 likely days of high tide flooding in Hampton in the previous year, not counting storms. Residents agree that the flooding is getting worse, and they’re starting to pay for it. On March 13, 2018 residents passed two warrant articles (with 76% and 82% of the vote) to appropriate funds to investigate options for dealing with increasingly frequent high tide flooding in specific neighborhoods, including the neighborhood where we captured the time lapse during Riley. As a stop gap measure, the town recently granted residents of those neighborhoods special permission to park in public lots any time the tides exceed 10 feet. 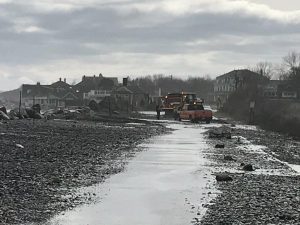 What does this all mean? Let’s Summarize.

Nuisance, high tide flooding is occurring more frequently in the Northeast. This means that a typical nor’easter is more likely to coincide with a nuisance high tide.

Severe winter weather, such as the pattern of nor’easters we saw in 2018, is becoming more frequent as the Arctic warms.

So, we have compounding trends that are leading to more frequent and severe flooding in coastal NH.*

*While we always caution that these trends can’t be used to explain or predict specific weather events, they do help us understand why we’ve seen so much wacky, wet, winter weather lately.

After the Riley’s tidal energy subsided, we headed out to Jenness Beach to measure the post-storm beach profile which helps us figure out how much sand was carried out to sea by the storm. As we pulled up to the beach parking lot, we noted that a changing room had detached from the bath house and sat stranded in the middle of the lot, surrounded by damaged pavement. The beach was noticeably skinnier and rockier—the waves had carried a lot of sand offshore (though natural beach processes dictate that much of that sand will likely wash back up on the beach over the next few weeks). But maybe more noticeable than the lost sediment and the parking lot damage was the number of officials at work cleaning up the mess. NHDOT workers were rebuilding shale piles and Town of Rye staff were rebuilding the winter beach berms. After a nor’easter like Riley it becomes increasingly apparent that, despite the undeniably severe power of the storm and the substantial costs the state, towns, and private property owners will incur to repair the damage, New Hampshire’s workers and residents are resilient to their cores.

While we have a long way to go to be ready for more flooding in the future, our built-in resilience bodes well for our chances of successfully adapting to the major climate changes coming our way. We hope that these storms will serve as an active reminder of the increasing need to proactively plan and prepare for today’s flood and tomorrow’s high tide. 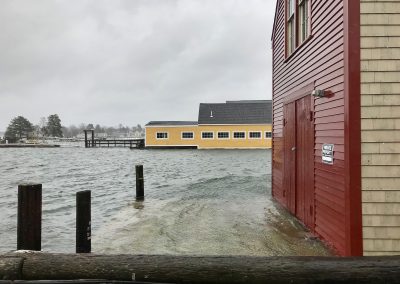 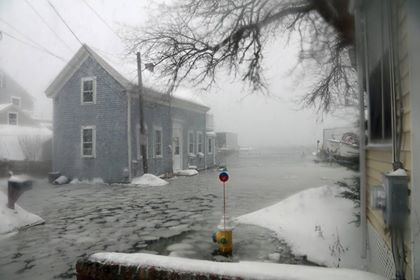 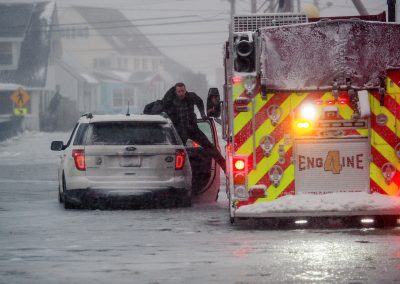 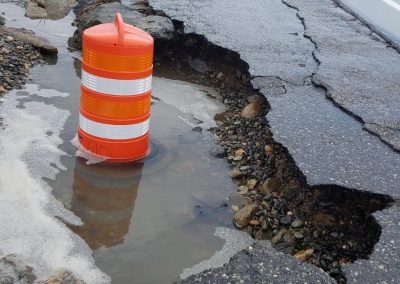 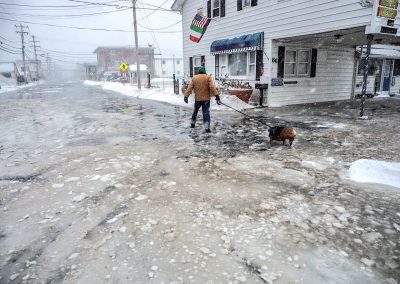 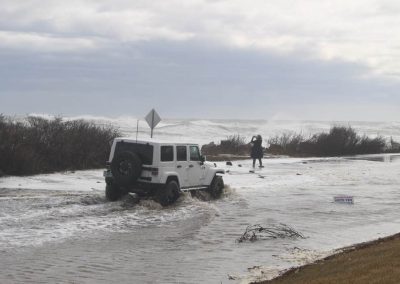 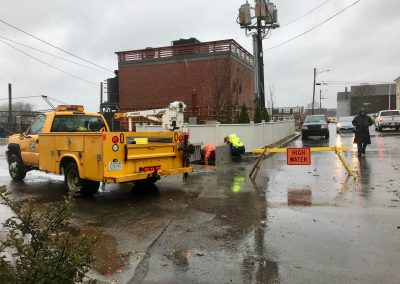 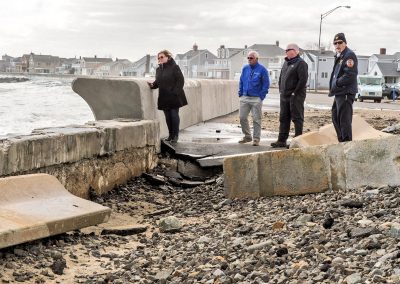 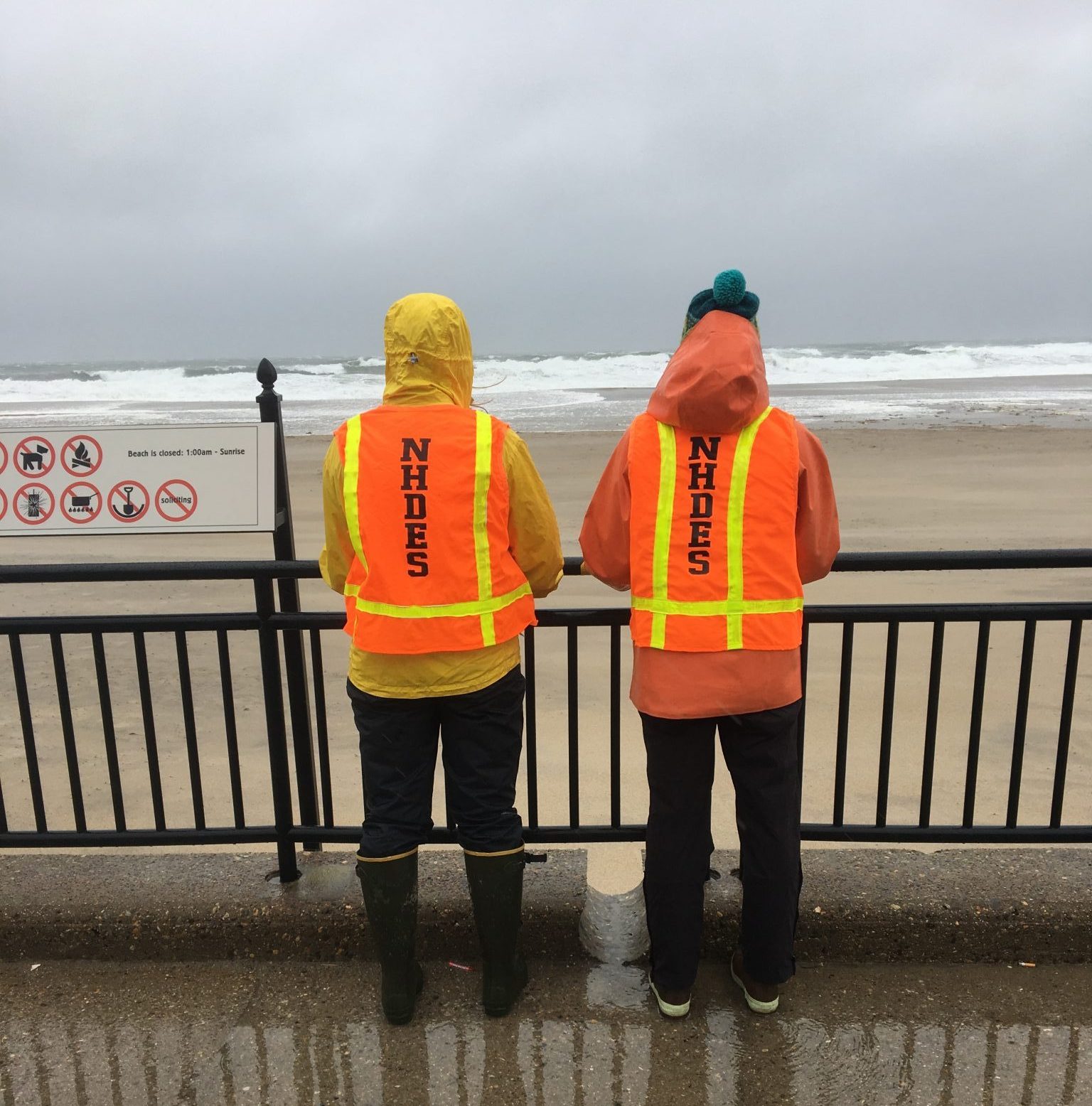 Want to learn more about efforts to reduce coastal flood risk and increase resilience in New Hampshire’s communities? Sign up for the New Hampshire Coastal Adaptation Workgroup (NHCAW) newsletter and follow up on social media to find out about our regular workshops and partner events. You can also visit the NHCAW Project Portal which highlights all sorts of past and present projects to prepare coastal NH for climate change impacts.

If you have questions for the New Hampshire Department of Environmental Services Coastal Program Resilience Team (Kirsten and Nathalie) you can reach out to them directly at Kirsten.Howard@des.nh.gov or Nathalie.Morison@des.nh.gov. They are always working to raise awareness about coastal flood risks, the things communities can do to avoid the costliest impacts, and grant opportunities.