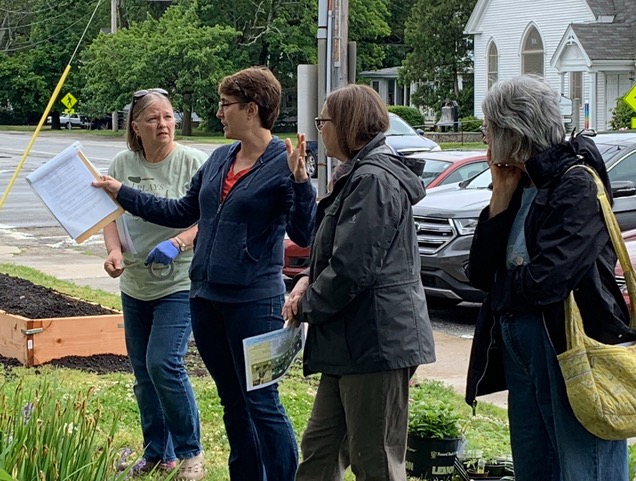 The New Hampshire Coastal Adaptation Workgroup (CAW) is pleased to announce that Rayann Dionne is the recipient of the 2021 CAW Climate Adaptation Community Champion Award.

The purpose of the award is to recognize local leaders who put climate-related research and outreach to work helping their communities respond to a changing climate. Rayann’s nomination was striking for the level of enthusiasm and support expressed by colleagues, municipal board members, and program partners. She received the award during the 2021 New Hampshire Climate Summit, held virtually May 26-27th. 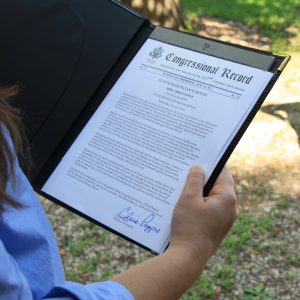 News of Rayann’s outstanding climate adaptation work and her CAW award captured the attention of U.S. Senator Chris Pappas (NH-01). In response, Senator Pappas prepared a Congressional Record in recognition of Rayann. Several CAW members were able to gather outside the Great Bay Discovery Center on July 21st, where one of Senator Pappas’ staff presented the Congressional Record to Rayann in person.

The official Congressional Record was entered June 30th and will forever detail Rayann’s many achievements and highlights from her award nomination package. The final lines of Senator Pappas’ statement for the Record read:

“Rayann Dionne has made an immeasurable impact on her local community and the state of New Hampshire not only through her concrete actions but also through the energy and positivity she brings to all her endeavors. Foregrounding the importance of climate action, Rayann has served her community in a way that warrants our recognition. Her continued involvement in her work puts her community, and the entire state of New Hampshire, on a pathway towards a more climate-resilient future. On behalf of my constituents in New Hampshire’s First Congressional District, I thank Rayann for her decades of enthusiastic dedication to our state. The Granite State is a better place because of the public service of Rayann Dionne.”

From 2008 through December 2020, Rayann was the Conservation Coordinator for the Town of Hampton, NH. She is also a founding Board member and Vice President and Treasurer of the Seabrook-Hamptons Estuary Alliance (SHEA). As a result of her work, Rayann has influenced the course of Hampton’s actions, its investments in assessing climate-related hazards, and its willingness to address the very real impacts of climate change on the town and its resources.

Rayann transformed her Conservation Coordinator position from that of a support position for the Hampton Conservation Commission and Planning Board to a significant role in municipal decision-making on issues related to conservation, wetlands, storm water management, impervious coverage, and floodplain management.

She was instrumental in guiding Hampton toward participation in FEMA’s Community Rating System. Rayann created the Conservation Commission’s unique painted rain barrel program, in which donated rain barrels were decorated by middle or high school students and then auctioned at the Hampton Garden Club annual plant sale. She managed the installation of a demonstration rain garden at the town’s library, and she organized clean-ups, a BioBlitz, and snowshoe tours in the Town Forest.

In her role with SHEA, Rayann has designed and led numerous workshops on topics ranging from flood safety and emergency preparedness, to salt marsh ditching and birds of the estuary. She is working with teachers at the local high school to involve students in projects to measure and improve the health of the estuary. Rayann has helped guide Hampton’s Coastal Hazards Adaptation Team, and is involved in all aspects of creating a unique management plan for the Hampton-Seabrook Estuary, including as a member of the steering committee for the Hampton-Seabrook Science Collaborative.

One nominator summed up Rayann’s impact on climate adaptation in Hampton by writing:

“From technical research, to community engagement, to presentations before boards, commissions and elected officials, Ryann’s voice was steadfast, her message to act was clear. Rayann was always a wealth of information, a powerhouse of energy, and a positive force that moved Hampton forward toward action. Her dedication to community and excellence in her work make her a true champion in every aspect of the CAW Climate Champion Award.”

CAW is thrilled to recognize Rayann Dionne with its 2021 Climate Champion Award and to see her work honored in a Congressional Record from Senator Pappas. 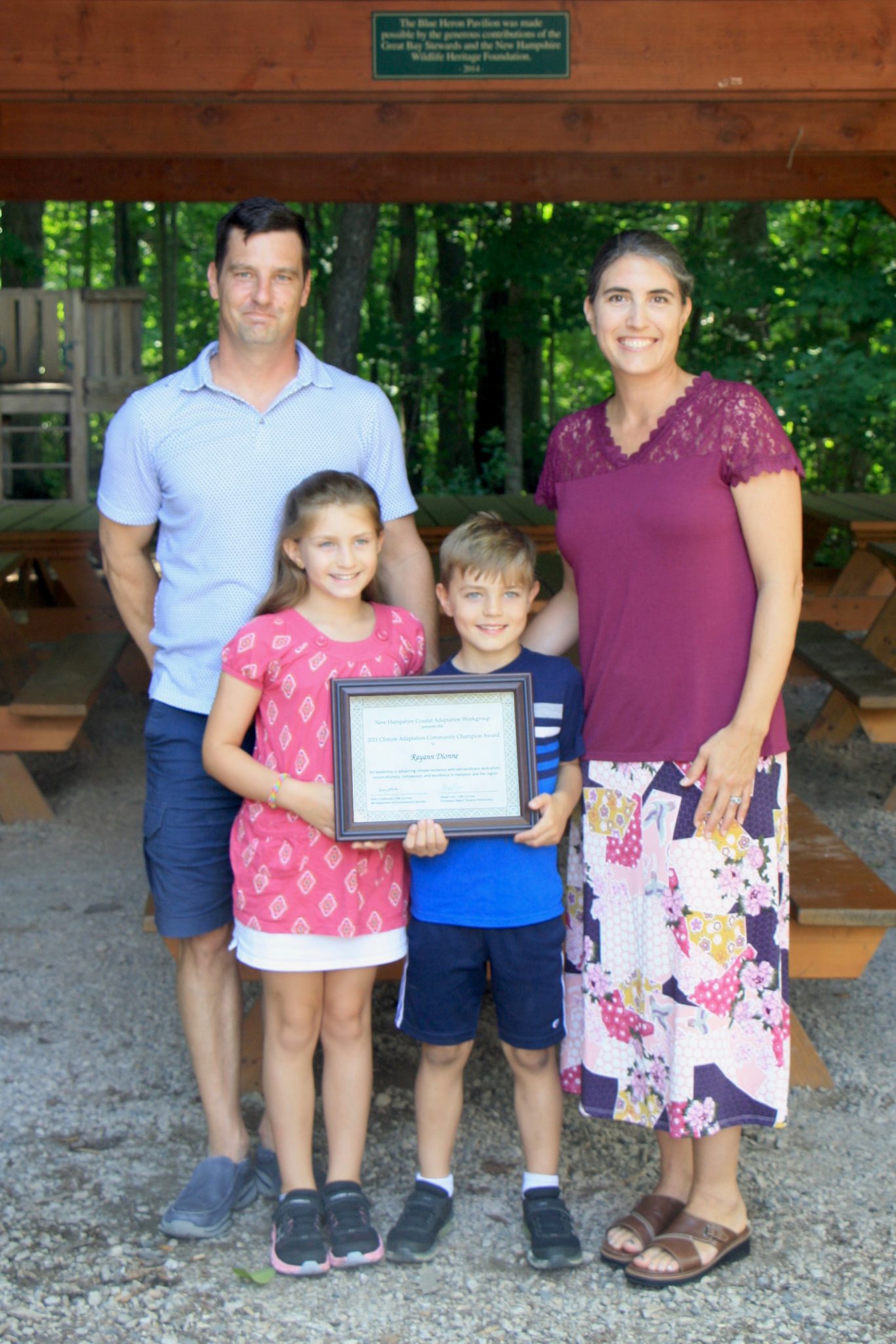 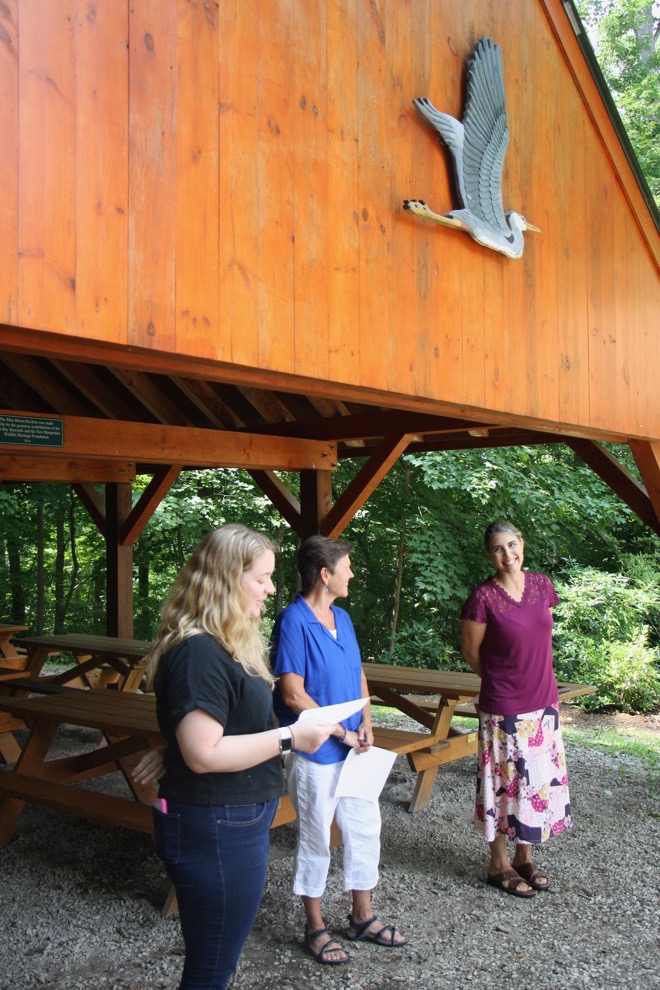 The purpose of the CAW Climate Champion Award is to recognize local leaders who put climate-related research and outreach to work, often in conjunction with CAW members. Click to view past winners.

Check out some of the innovative #stormwater management strategies the City of Dover has undertaken to address impacts from climate change, summarized in an article by Kyle Pimental from @StraffordRPC and Ben Sweeney from @NHDES - https://www.nhcaw.org/innovative-approaches-to-stormwater-management-improve-resiliency/

Getting to the NH Seacoast is expected to get a lot more difficult in the future due to rising sea levels, according to the recently completed Seacoast Transportation Corridor Vulnerability Assessment. http://ow.ly/QQlr50JUeH2 @RPC_NH @UofNH @NHDES @NewHampshireDOT