The State of Our Estuaries 2018 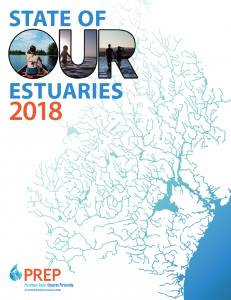 Portsmouth, NH – For those of us who live, work, and play in the coastal watershed, it can be hard to take a step back and get a big-picture view of how things are going in our estuaries and the communities around the watershed. Fortunately, our friends at the Piscataqua Region Estuaries Partnership (PREP) took on this gargantuan task to help us do this, with their recent release of the 2018 State of Our Estuaries report. Every five years, PREP, as one of the 28 National Estuary Programs around the nation, synthesizes data and reports out on the status and trends of the health of our estuaries – both the Great Bay Estuary and the Hampton-Seabrook Estuary. On December 8th, 173 people came together at the State of Our Estuaries (SOOE) conference in Portsmouth to learn about the results of this recent assessment.

This incredible video (directed and edited by Emily Lord) kicked off the conference, with footage exploring the Piscataqua Region watershed from the headwaters to the coast, reminding us all of what we are working to protect.

Next on the agenda was the keynote address by Peter Egelston, owner and president of Smuttynose Brewing Company. Peter talked about how his relationship with water has changed with time and geography – from living in southern California, where water quantity is a real concern, to living in NYC near a superfund site, to now owning a brewing company highly dependent on water (beer is 95% water). He emphasized that we need to find regional solutions to regional problems and translate the State of Our Estuaries report into action. 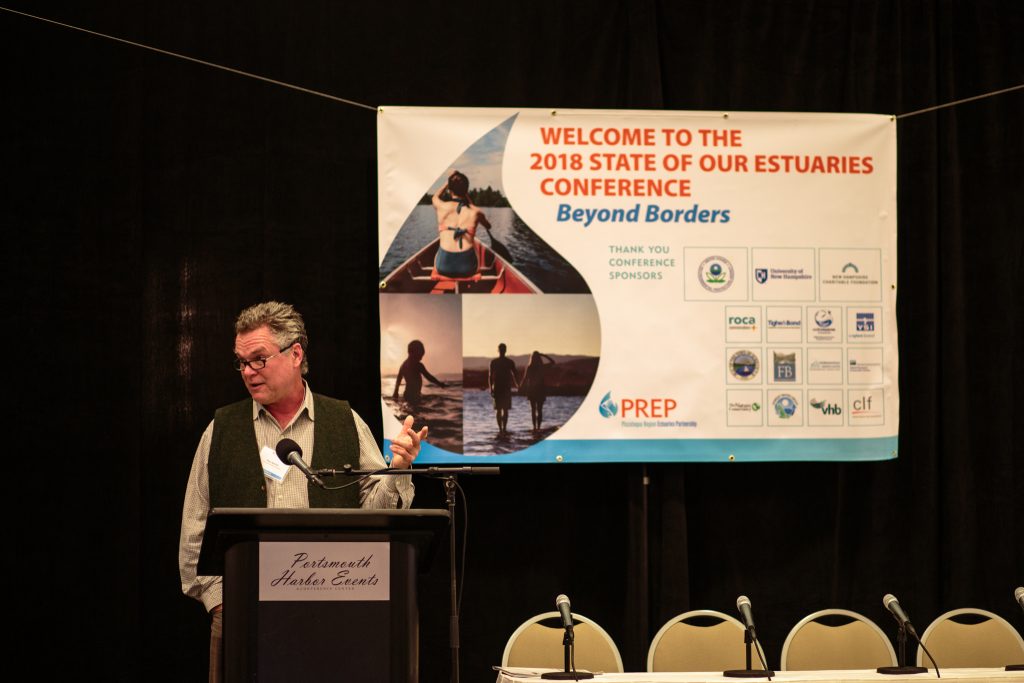 It might feel like a drop in the bucket, but buckets can be filled one drop at a time. 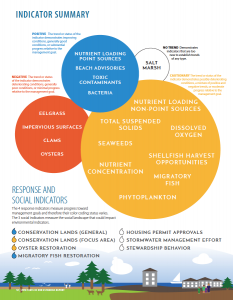 Then, a series of presenters and panelists summarized what we know about the health of our estuaries and the trends in a range of indicators. To cut to the chase, there was a lot of bad news – 12 of the 16 environmental indicators are in the ‘cautionary’ or ‘negative’ trends categories. These indicators provide signals that tell us about the health of the estuaries, and the bottom line is that our estuaries have declined and are under stress. Eelgrass, oysters, and clams have declined. Invasive seaweeds have increased. These are signs of the estuary responding to stresses, which can come from natural processes and human impacts.

Climate change impacts can be found throughout the report. The changing climate adds stresses to the system and can worsen existing stressors. For example, many of the water quality parameters are influenced by precipitation patterns – “Between 1996 and 2014, extreme precipitation (two inches or more in one day) in the Northeast was 53% higher than it was in the previous 94 years” (2018 SOOE report, p.7). This is a stressor on its own and also exacerbates the impacts of rising impervious surface rates due to growing population and development. There is a LOT of work to do, and the task feels daunting. Estuaries are complex in their functioning and their response to stress, and there are some factors we cannot control, so we need to identify the leverage points we can impact and focus on where we can make the most progress. 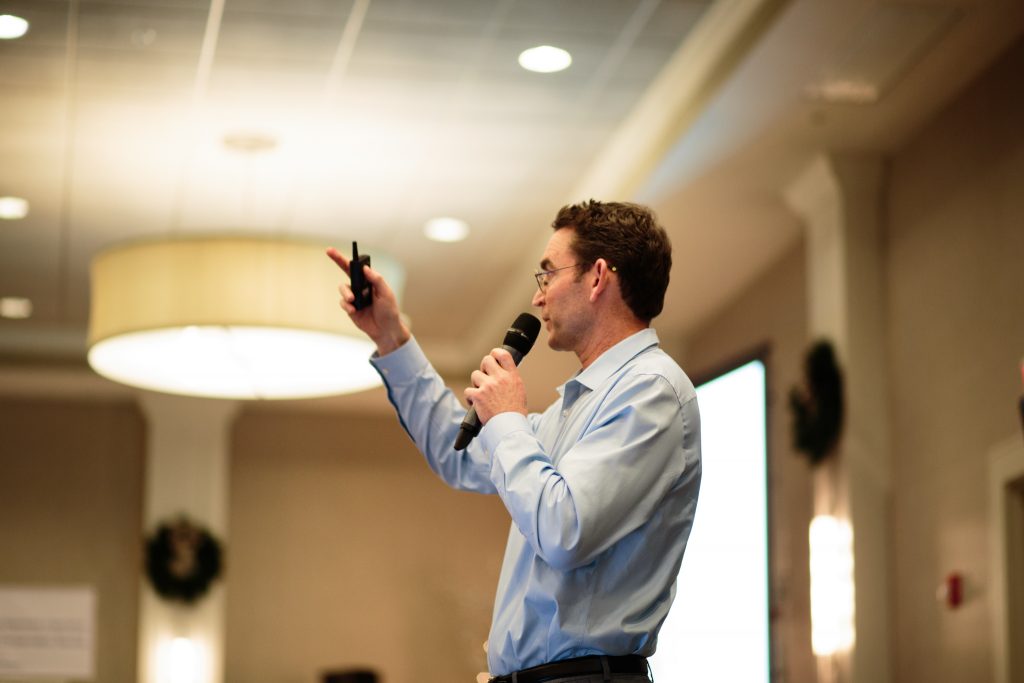 BUT it wasn’t all bad, and there are some awesome positive elements to report:

4 environmental indicators are showing a positive status or trend: 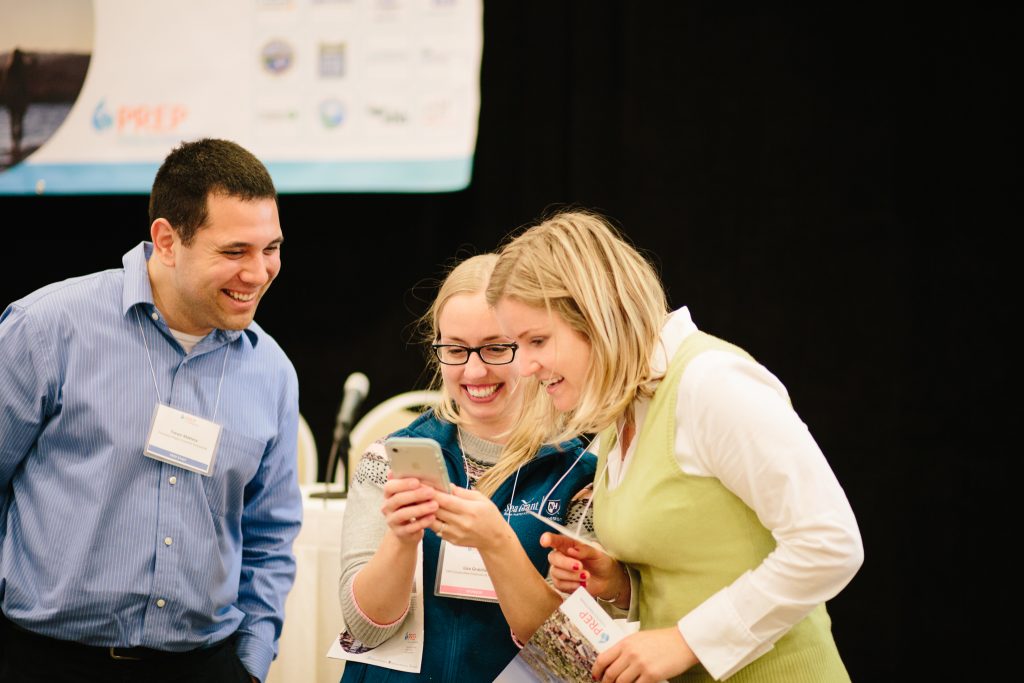 There are 3 new social indicators, measuring the social landscape that could impact environmental indicators:

While there isn’t enough information yet to measure these trends, we now have a baseline to be able to gauge progress over time! These new indicators are housing permit approvals, stormwater management effort, and stewardship behavior.

The best part of the day (in my opinion) was hearing about the steps municipalities and community members are taking to improve water quality and protect our estuaries. We heard about wastewater treatment plant upgrades and a dam removal project in Exeter, an assessment of the vulnerability of Portsmouth’s historic district to climate change, water quality projects in Kittery, stewardship projects led by the Great Bay Gunners, and collaborative work between communities through the Seabrook-Hamptons Estuary Alliance. Despite the predominantly negative news reflected by the monitoring results, what gives me hope is hearing about the dedication and on-the-ground efforts by so many individuals and communities to make progress. 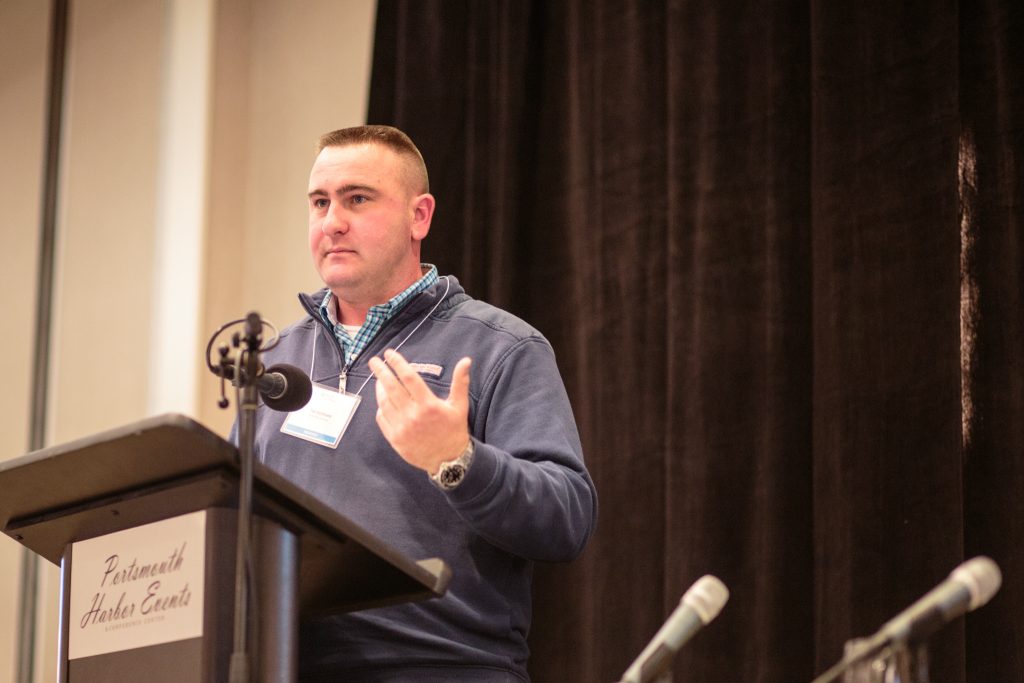 Ted Hartmann, from the Great Bay Gunners, described his connection to the bay and his groups stewardship efforts (Photo: Emily Lord)

It will take a village to improve and protect the health of our estuaries, especially as stressors from climate change continue to grow – from those out in waders collecting data, breweries using locally farmed kelp to make creative (and tasty!) beers, and local restaurants supporting the local oyster restoration work, to those in the lab testing water samples or on the computer crunching millions of data points to identify trends, municipal decision makers and citizens supporting wastewater treatment plant upgrades, improved stormwater regulations, and buffer protection, to the land trusts and landowners working on conserving more land, citizen scientists providing boots-on-the-ground monitoring and research capacity, and folks like the Great Bay Gunners and so many others volunteering their time to clean up the places they care about. Though we left the conference with a copy of the report that contains some disheartening news, I think we all also left feeling reenergized and optimistic about the hard-working and passionate community that already exists around caring for our estuaries!

Check out the report, guides for citizens and municipalities, and more: http://www.stateofourestuaries.org/

Following the conference was an amazing event at 3S Artspace in Portsmouth called “Stories from the Field: Celebrating Citizen Science in New Hampshire,” hosted by PREP, NH Sea Grant, UNH Cooperative Extension, and the Gundalow Company. Five citizen science volunteers told TED-style stories about why they volunteer and what the experience has meant for them. Over 140 attended the event, and you could hear a pin drop during the volunteers’ stories! From growing oysters to serving as a “salamander crossing guard” and more, these volunteers are doing great work to take care of New Hampshire’s natural resources. And we know from the 2018 State of Our Estuaries report how needed this work is. Hopefully, the 2023 State of Our Estuaries report will show an increase in the “stewardship behavior” social indicator as well as progress in more of the environmental indicators. 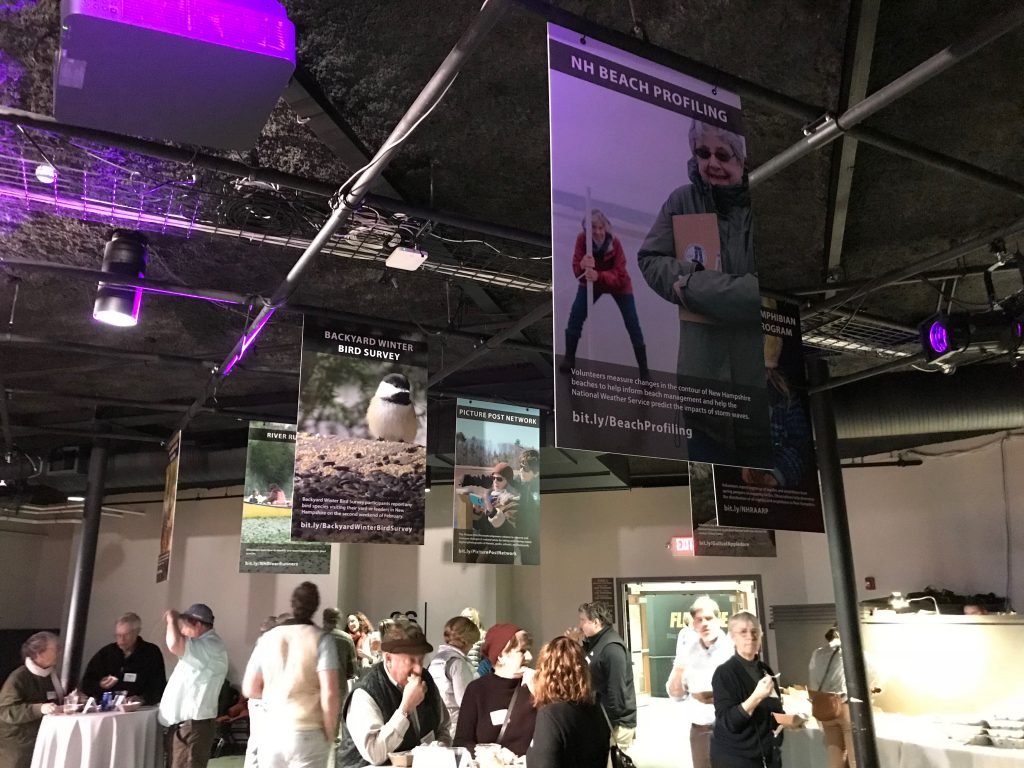 The Stories from the Field highlighted many NH citizen science programs 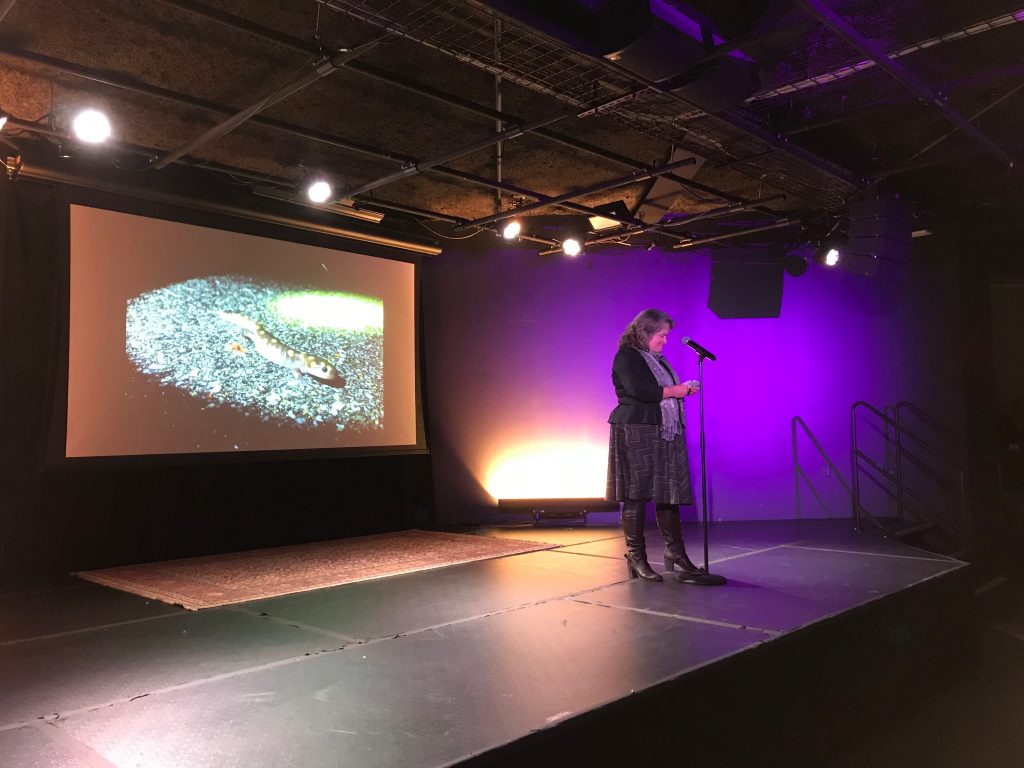 One of the citizen science storytellers, a salamander crossing guard 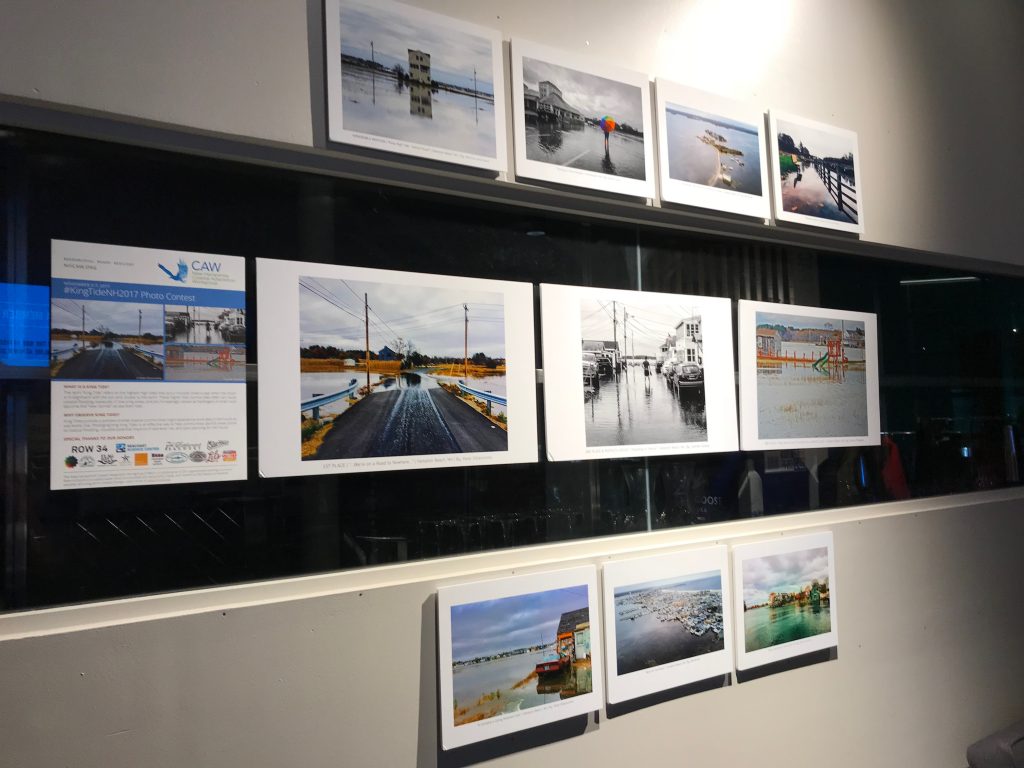