I am not the first, nor will I be the last, to say that the creation of the internet is the most significant technological advancement in the modern era—and it’s not even close. In fact, when all is said and done the internet may be one of the greatest inventions in human evolution. It might rank right up there with the ability to control fire, the wheel, vaccines, and electricity. (I apologize to all the fans of sliced bread out there, but that notion is toast.) The internet was revolutionary in transforming how we consume information and connect with millions of people through virtual networks across the world, more commonly known as social media.

Social media is the connective tissue that links us all together. Whether it’s Facebook, Twitter, Instagram, or Snapchat, social media allows people to share information and ideas, and participate in other forms of personal expression such as posting photos or writing blogs. If you have a message that you want people to hear, social media provides the most effective and influential conduit. Just to provide some perspective, at the time I am writing this there’s a video that was posted by @nowthisnews of the blooper outtakes from Barack and Michelle Obama’s first Christmas address in 2009 in which Barack cannot stop laughing—it has had over 3.8 million views. There is no other medium that can capture that amount of attention so quickly. 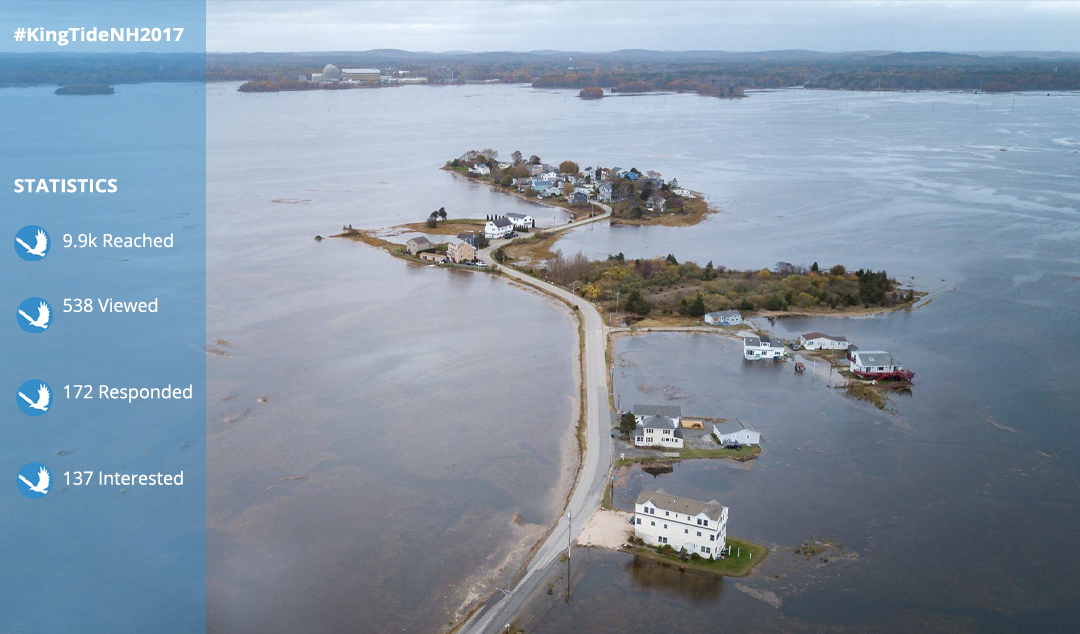 Over the last several years the New Hampshire King Tide event, an effort that has largely been led by members of the New Hampshire Coastal Adaptation Workgroup (CAW), has used social media to raise public awareness of rising sea levels. According to CAW, over the last two years 99 individuals from around the seacoast region have submitted a total of 267 photos to this annual contest.

“It was interesting to witness how a targeted social media outreach strategy, along with creative and diverse content plan, was received by audiences. The social media team came up with a range of different posts: from King Tide photo tips, to maps showing people the good photo spots, to plain old incentive-based outreach with posts that show people what prizes they could win. I think the variation in content was what kept the contest fresh in people’s minds.”

In 2017, the event page on Facebook reached approximately 9,900 accounts, was viewed 538 times, and tracked 137 different individuals who were interested in contributing. Other forms of social media, which included Twitter, Instagram, and the CAW website, all provided additional platforms for engagement. One of the most effective ways to spawn conversation on a particular topic within an online forum is to provide a hashtag. The #KingTideNH2017 was posted 87 times on Twitter, 92 times on Facebook, and 70 times on Instagram. The hashtag was often accompanied by photo uploads with creative descriptions or captions and was the catalyst for lengthy online discussion threads.

“Social media helped us reached not just our followers, but our followers’ networks—greatly expanding the number of eyes on the King Tide Photo Contest and learning about CAW. Using the platforms, especially Facebook, also allowed us to interact more with people and to generate dialogue in a way that otherwise wouldn’t have happened.”

This type of engagement translated directly to interpersonal interactions between the public and CAW members, and led to action. In one example, during the promotion of the event, an architect at a local firm reached out on Facebook to inform CAW members about the American Institute of Architects’ New England Chapter Annual Conference in Portsmouth, which focused on resilience, and is scheduled to present at the March CAW meeting to talk about incorporating climate change impacts into design work. Two NHDES Coastal Program staff members, Vidya Balasubramanyam and Kirsten Howard, both had the pleasure of attending the conference back in October.

“Social media takes time, but it pays off. By curating over six weeks of promotional content, we were successful in engaging a broader audience than ever before. It was rewarding to be able to instantaneously measure our effectiveness with each like, share, and comment and learn where we might need to bolster future education and outreach efforts based on people’s reactions to the photos.”

As part of a generation that has had access to the internet its entire life, the digital world is the norm for me and my peers. The online network the internet created is as much of a public space to me as a courtyard park is to my mother. Social media and the platform in which it resides is a living, breathing entity that has an endless appetite for different perspectives, new and exciting ideas, and innovative solutions to problems that connect us together. This year’s King Tide event is a perfect example of how social media was applied to effectively raise awareness and engage the public on an important issue facing the region. #ItsGoodToBeKing