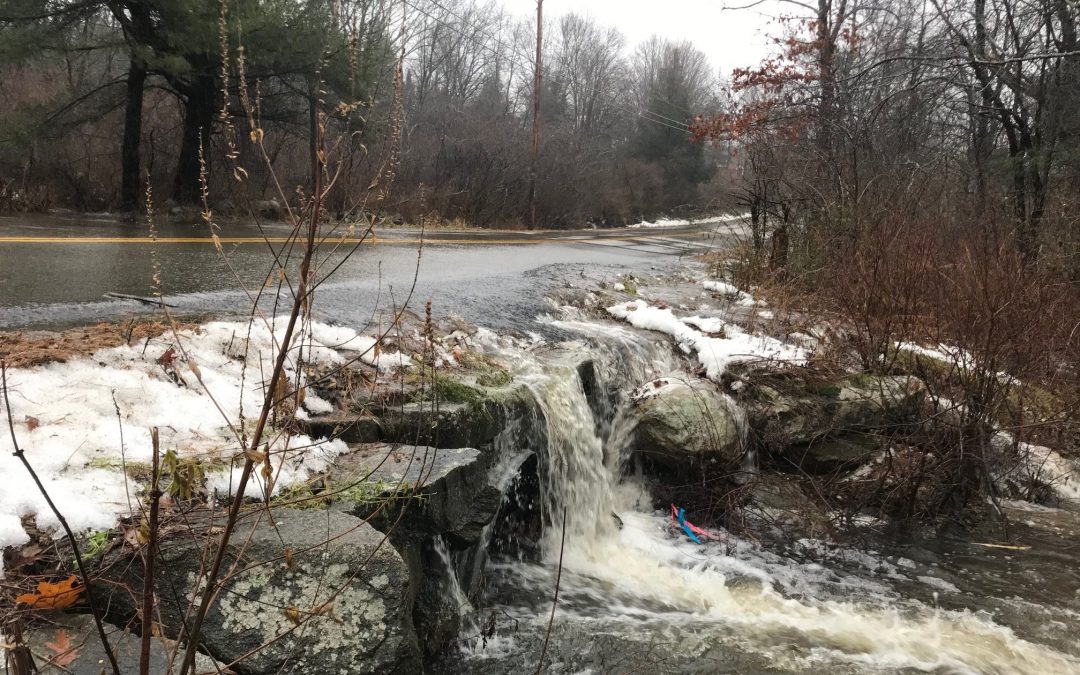 In 2015, the Town of Newmarket, with support from Strafford Regional Planning Commission (SRPC) staff, led a process to engage residents in envisioning the community’s future. This effort helped the town better understand residents’ near- and long-term views and ultimately led to the planning board’s adoption of an updated community vision chapter of the town’s master plan. The vision outlines ideas regarding land use and future planning activities, including a stronger commitment in becoming “more resilient against coastal and riverine flooding” and “the integration of climate adaptation measures into municipal programs, policies, and operations.”

Over the past several years, Kyle Pimental, SRPC principal regional planner, has worked with Newmarket on achieving its resiliency goals by drafting new stormwater regulations, including sea level rise and coastal flooding in the town’s most recent hazard mitigation plan update, and conducting a groundwater rise modeling effort that identified public drinking water supplies’ vulnerability to salt water intrusion. In 2016, the planning board adopted a future land use chapter of the master plan that suggested the town begin to plan for future infrastructure projects in a way that gives consideration to future flood risks by adding potential sea level rise projections to traditional engineering designs. The chapter goes on to state that the town should consider infrastructure and site design standards that reflect current extreme precipitation levels, as well as designs capable of managing a 15% increase in extreme precipitation event frequency after the year 2050.

This year Newmarket received two grants—one from the Coastal Resilience Grant Program of the New Hampshire Coastal Program (NHCP) and one from the New Hampshire Department of Environmental Service’s Aquatic Resource Mitigation Program—to support projects to enhance resilience to current and future coastal hazards. The grants will fund the replacement of a tidal culvert at the Bay Road crossing of Lubberland Creek in 2019; the Nature Conservancy (TNC) will provide technical assistance. This year alone, Bay Road has flooded three times at the site, which blocks the upstream migration of thousands of American eels each spring and restricts inland salt marsh migration. This project will be the culmination of a four-year effort that began when a previous NHCP Coastal Resilience Grant enabled the Town of Newmarket, TNC, NHCP, and the New Hampshire Fish and Game Department to collaborate with an engineer on designing a multi-benefit solution for the site.

Diane Hardy, town planner and recent recipient of the 2018 Coastal Adaptation Workgroup’s Climate Champion Award said, “having an on-the-ground project, such as the Lubberland Creek culvert replacement, will help to increase public awareness of climate change threats and show other communities how, they too, can increase resiliency related to flooding and sea level rise going forward. This is an important, tangible project to show we can pro-actively work together to adapt to climate changes and its effects as well as to implement the local goals as stated in the future land use chapter of the master plan and our recently adopted hazard mitigation plan. We are honored to be partnering with the Strafford Regional Planning Commission, the Nature Conservancy, the New Hampshire Coastal Program, NH Fish and Game Department, U.S. Fish and Wildlife Services and other stakeholders which will accomplish multiple long-term environmental benefits as well as meet local public safety and infrastructure needs and result in long-term cost savings to the Town of Newmarket.”

The Lubberland Creek project is part of a larger coastal resilience initiative involving TNC and NHCP to evaluate most of the state’s tidally influenced road-stream crossings based on their condition, flood risk, ecosystem health, and feasibility of restoration. The evaluations consider each crossing’s compatibility within the ecosystem and capacity to respond to current as well as future flooding based on projected sea level rise. The assessments will enable community officials and road managers to make informed decisions when prioritizing tidal crossings for repair or replacement. The final report of the 2018 Resilient Tidal Crossings Project will be available in April 2019.

Just last month TNC learned that it was awarded a National Coastal Resilience Grant from the National Fish and Wildlife Foundation. This funding will enable TNC and a broad group of municipal partners to fully design and engineer resilient tidal crossing replacements at up to five other high-priority coastal zone sites.

“We are excited to expand our work from Lubberland Creek to the next set of high priority tidal crossings, and we’ll be looking for similar types of opportunities that provide multiple benefits for both people and nature,” said Peter Steckler, TNC’s GIS and conservation project manager.

Communities in the coastal zone that are interested in learning more about this upcoming effort should contact Pete Steckler at psteckler@tnc.org or at 603-224-5853.

Photo Credit: Joanne Glode captured this photo of recent flooding on Bay Road in Newmarket at the Lubberland Creek crossing