The Town of Durham recently installed a unique public art project that aims to close the spatial and temporal gaps between individuals today and the long-term effects of climate change. 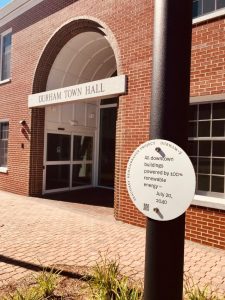 To bring this project to Durham, the Town collaborated with the Strafford Regional Planning Commission, UNH Cooperative Extension, and NH Sea Grant. Durham’s installation, “Seacoast Remembrance Project,” is one of the first in a larger, national initiative called “Remembrance of Climate Futures” spearheaded by Thomas Starr, professor of Design at Northeastern University. The goal of the initiative is to strengthen the public awareness of climate change by using site-specific markers of projected climate impacts to induce a personal and thought-provoking response. Each marker is inscribed with a message that places the reader in the future by using the language of historical markers, e.g., “Wagon Hill closed for summer due to health concerns related to outbreak of ticks – June 8, 2044.” By framing these future events in the past tense, the viewer is presented with the long-term impacts of climate change in a more immediate, local, and impactful way.

Kyle Pimental, principal planner with Strafford Regional Planning Commission and project partner, acknowledges that practitioners and researchers are faced with the challenge of downscaling a global problem to the local level. “It can be extremely difficult for people to wrap their heads around the enormity of climate change,” said Pimental. “We’re trying to communicate issues that don’t always resonate due to the perception that they lack immediacy. Our engagement with this project helps us counteract these issues.”

For several months, project partners met with the Durham Leadership Team to brainstorm a series of potential climate statements for the markers, as well as associated timeframes and locations. The Town made sure that all statements generated as part of this project were based on the latest climate science and recent vulnerability assessments. Amanda Stone and Lisa Wise, with UNH Cooperative Extension and NH Sea Grant, were instrumental in organizing and facilitating meetings with the Leadership Team and providing their climate science expertise throughout the process. “The Leadership Team was very engaged in thoughtfully reflecting on the best available climate projections and vulnerability assessment information to develop realistic, locally relevant statements for the markers,” said Stone and Wise. “Durham was willing to be the first NH community to work on this project because they recognize the importance of engaging the broader community in thinking about climate impacts and actions.”

Careful planning went into the final selection process to include a range of climate-related impacts, including extreme heat, warmer winters, changes in species type and habitat composition, and sea-level rise, as well as a range of timeframes, from very near-term to further out in the century. One of the climate markers describes an event that has already happened: “Populations now thriving, Mississippi kites first observed in Durham near here by local bird watchers – August 15, 2018.” The Town also decided to include a few statements related to implementation of adaptation policies, to provide a message of positivity and optimism in addition to the impacts, which can feel overwhelming.

When asked about the project, Michael Behrendt, Durham town planner, said, “I see birdwatchers near my house now intrigued by the recent arrival of Mississippi kites. But this is not an occurrence to celebrate. The “Seacoast Remembrance Project” is a playful and creative approach to a serious issue. People walking through town may at first be perplexed by the low-key signs with the curious messages. We expect the shift in time orientation to provoke some thought about where the world is heading if we do not collectively make dramatic changes.” 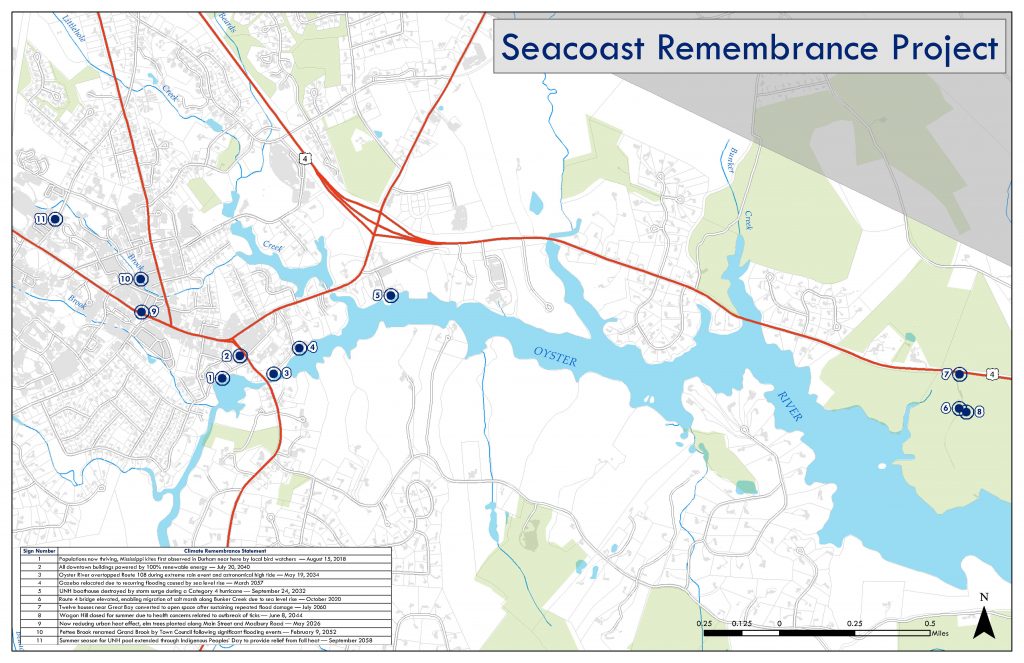 The markers were strategically placed throughout the Town in widely visible areas with public access, including: Town Hall (1), Mill Pond (1), Jackson’s Landing (1), Main Street (1), outside Madbury Commons (1), the UNH outdoor pool (1), Town Landing (2), and Wagon Hill (3). Each marker features a distinctive QR code at the bottom of the marker for readers to scan with their smartphones, linking to the project’s online platform, where participants can find additional climate information, as well as a comprehensive list of climate change efforts the Town has undertaken over the years. This past summer, Durham applied for a coastal resilience grant from the New Hampshire Department of Environmental Services Coastal Program to develop a climate adaptation master plan chapter, which, if funded, is slated to begin in early 2020.

Starr, who has been working with municipal leaders in Essex and Cambridge, Massachusetts, to develop their own sets of “Remembrance” markers, explains, “It has been my privilege to work with such a dedicated group of individuals to realize the project here in Durham. It serves as a model for my intention to spread the initiative nationally. Placing actual projected data that municipalities are grappling with at the site to which it pertains helps people connect to the real threat of climate change. Encountering markers that clearly describe the future at the spot where one is standing resonates—making climate change local, personal and tangible.”

Thomas Starr is Professor of graphic and information design at Northeastern University. His work focuses on visual communication that engages civic, social and political discourse, challenging the public perception of issues such as gun violence, domestic violence, reproductive rights and climate change. He strives to expose this area of practice, where design intersects freedom of speech, to students, designers, academics and to a broad public. His work takes many forms—designing, writing and curating. Underlying his visual work, his research into the typography, printing and dissemination of the Declaration of Independence links the responsibility of design to the fundamentals of democracy. Starr’s work has been published in the US, UK, Netherlands, Switzerland and Japan and honored by the American Institute of Graphic Arts, the Society for Environmental Graphic Design, the Association of American University Presses, the Art Directors Club of New York, the International Biennale of Graphic Design in Brno, the International Poster Biennale in Warsaw, the International Poster Festival in Chaumont, and the Federal Design Council. His designs are in the collections of the Zurich Design Museum and the Library of Congress.