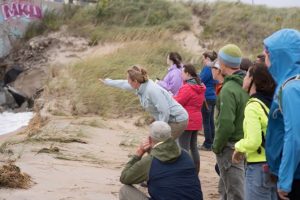 Alyson Eberhardt points out erosion in the dunes to a group of volunteers.

Sand dunes play an important role in buffering the Hampton and Seabrook coastlines from erosion and flooding; however, the dunes that remain along the New Hampshire face continued pressure from storm surge, dune die-off, and trampling of beachgrass by users of the area. In 2015-2016, a community based restoration effort supported by the NH Coastal Program was initiated by UNH Cooperative Extension and NH Sea Grant. Building on the successes and lessons learned from that project, this project expanded and refocused restoration and planning efforts to identify and address existing vulnerabilities in the communities of Hampton and Seabrook. Overall 78 community volunteers and 132 K-12 students were engaged in the project, and 15,000 plants were planted.

(1) Working with the NH Department of Natural and Cultural Resources and the UNH Civil and Environmental Engineering Senior Capstone Program (CEE 797), design scenarios for a dune walkover at Hampton Beach State Park were developed. 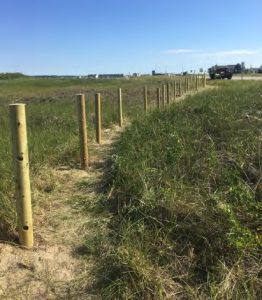 Posts being installed along the preferred walking paths at Harborside Park in Seabrook, NH.

(2) Based on use survey results, two trails at Harborside Beach and Dunes were delineated with ropes and posts. With assistance from the Seabrook Department of Public Works, more than 140 5-inch diameter wooden posts were installed along the two primary trails. A NH Sea Grant Marine Docent volunteer with expertise in knot tying advised and assisted in installing ¾ inch safety line through the wooden posts.

(4) Dune elevation profile data were collected seasonally to document changes in the dune characteristics over time, looking for seasonal patterns and long-term trends. The dunes showed very little change over time, even in a stormy Nor’easter season. Comparatively the areas without dunes showed a lot of change, with significant erosion occurring during the storm season. 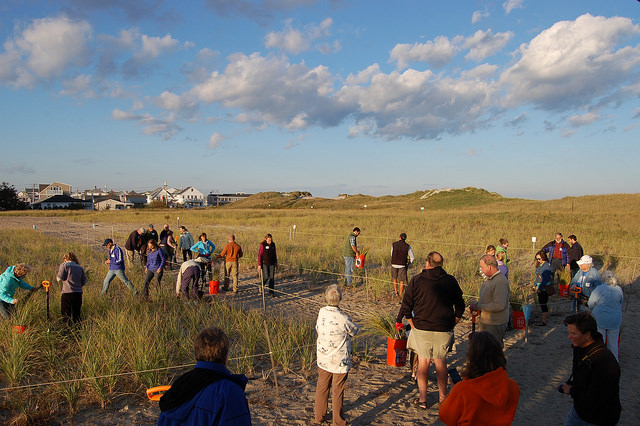 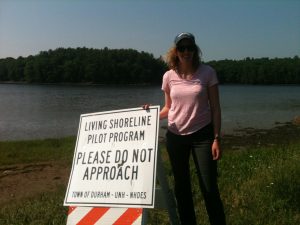 The Town of Durham completed work under a resilience grant to monitor erosion conditions and design a living shoreline for Wagon Hill Farm. The town plans to manage the shoreline at Wagon Hill Farm (WHF) on the tidal Oyster River to restore valuable salt marsh habitat and minimize erosion using a living shoreline. Approximately 300 feet of new shoreline is planned to restore lost and degraded salt marsh (~15,000 ft2), address aggressive erosion, and prepare for sea-level rise at WHF. As one of the few public access points on Little Bay, the project will also provide an excellent educational opportunity, and signs will explain the history, project importance, wetland resources, as well as public use guidance to minimize erosion stress at the property. This will be the first living shoreline project built to address coastal erosion in New Hampshire.

(1) The University of New Hampshire (UNH) monitored wave and tide data and found that tides and small, frequent, wind-driven waves seem to contribute to erosion at Wagon Hill Farm.

(2) UNH monitored erosion using pins driven into the shoreline and found that some areas exhibit as high as 15 inches per year of erosion while other areas exhibit no erosion at all. (3) A test structure meant to replicate a sill installed in a living shoreline project was installed to evaluate whether sediment could be captured as well as whether the structure would hold up through the winter. Sediment did get deposited behind the structure. The structure was destroyed by winter storms. (4) Game cameras monitored activity on the Wagon Hill Farm shoreline throughout the year, in an attempt to gauge whether foot and dog traffic on the salt marsh was contributing to erosion. UNH calculated that two people walked on the shoreline site every day and one dog walked on it every other day.

(5) The WHF team developed 90% construction designs and a monitoring plan for the living shoreline project. The project will restore 0.35 acres of salt marsh and tidal buffer area and enable salt marsh to migrate with sea-level rise. 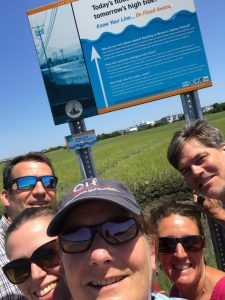 The Rockingham Planning Commission (RPC) worked with the towns of Seabrook, Hampton, Rye, and Portsmouth as well as the NH Division of State Parks to install high water mark signs that show elevations at which a 1% annual chance flood and future sea-level rise could occur. Signs were installed in the following locations:

Check out the map below of the sign locations; then go take a selfie with all the signs and post to social media with #highwatermarknh! 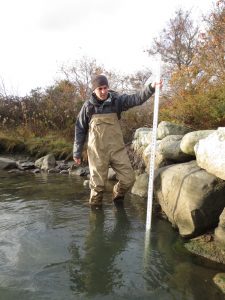 The Philbrick Pond saltmarsh is a 29 acre marsh draining to the Atlantic Ocean in North Hampton, NH. Flow into and out of the marsh is through drainage structures beneath Ocean Boulevard (US Route 1A) and what was believed to be a partially crushed vitrified clay pipe beneath a 1900 vintage trolley berm. Both the trolley berm pipe and the Route 1A culvert constrain flow out of the marsh during normal tidal fluctuations and after precipitation events. During the extreme “Mother’s Day” storm of 2006, flow limitations due to the trolley berm culvert and other hydraulic constraints resulted in flood impacts to homes surrounding the marsh, and the isolation of more than 40 homes for more than three days from vehicular traffic, including ambulance and fire vehicles. The two culverts also limit flow into and out of the marsh during normal tidal cycles, and limit flood levels in the marsh during storm surge conditions. Storm surge flooding will increase with future sea level rise. As this project was initiated, it was believed that the trolley berm culvert needed to be replaced with an appropriately configured opening that would optimally minimize flood damage from both extreme precipitation events and storm surges, and that also would improve marsh health through increased daily tidal inundation and draining. This project provided funds for the completion of topographic surveys, a complex hydrology and hydraulic analysis, a wetlands evaluation and alternatives analysis and conceptual design.

The marsh health and flooding issues described above have been deliberated in North Hampton for decades. Poor and declining health of the Philbrick Pond salt marsh was documented in 1984 by Dr. Frederick Short, Ph.D. of the Jackson Estuarine Laboratory (“North Hampton Salt Marsh Study”) attributed both to mosquito control ditching completed in the 1950’s that left significant areas of the marsh permanently inundated, and limited daily tidal variation due to culvert configurations that significantly limit outflow at each low tide. Both of these conditions continue to this day. Dr. Short, and several subsequent reviewers in the ensuing 20 years, had recommended removal of the trolley berm and creation of an open channel as a partial solution. Concern has been expressed by many residents over the years that removing the trolley berm and creating a channel would create a significant risk of flooding from storm surges, from the ocean. The 2006 Mother’s Day storm and related isolation of homes has spurred on-going concern regarding flooding from extreme precipitation events, with flow coming from the westerly, upland direction. These competing concerns are both valid and were the reason for the need for this investigation.

Through this project, the Town of North Hampton hired CMA Engineers and the University of New Hampshire Jackson Estuarine Laboratory to conduct an assessment of both culverts, wetlands monitoring, a hydrologic and hydraulic analysis of existing conditions and alternatives, conceptual designs for alternatives, and recommendations for future action. 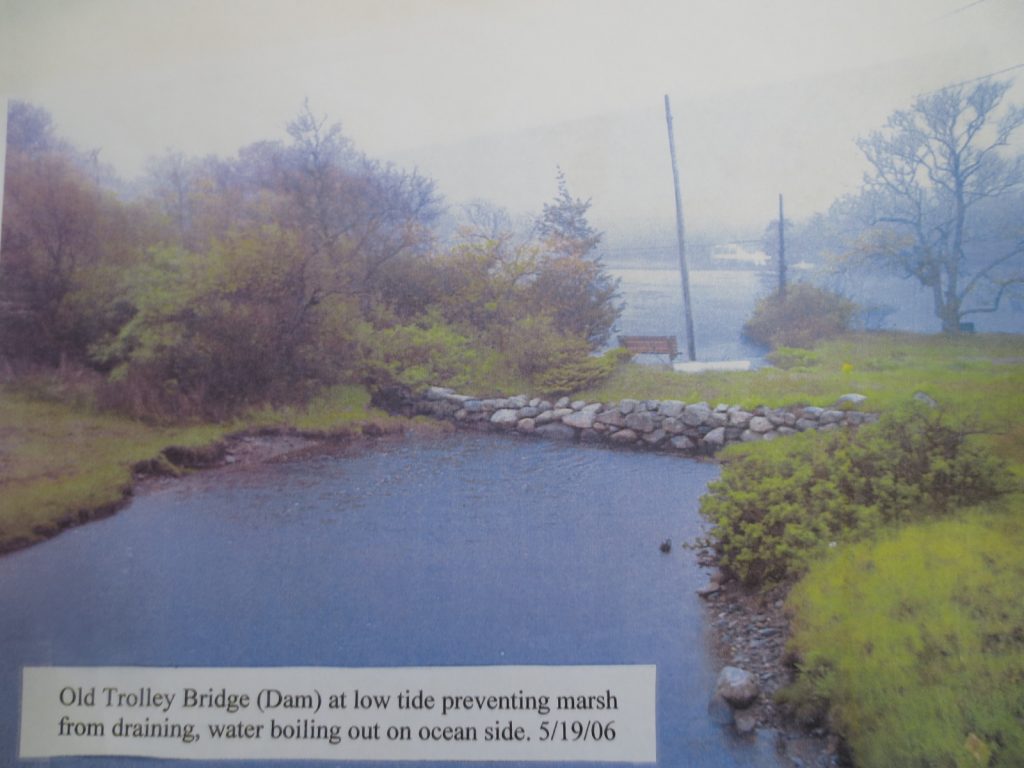 Photo taken of the Trolley Bern and Philbrick Pond after the major storm in 2006.

The NH Department of Transportation should consider proceeding with modifications to the inlet of the Route 1A Ocean Boulevard culvert to remove the existing cobble V-notch weir and install a concrete slab inlet to the existing culvert, with associated required dredging of a small quantity of sediment in the existing culvert pond. Agreement of the two private property owners should be sought and obtained. The NH Department of Environmental Services and its NH Coastal Program should consider providing funding and technical assistance.

With respect to emergency flood event access to Old Locke Road, Pond Path and Bradley Lane, North Hampton Town staff should consider having preliminary discussions with property owners in the vicinity of Bradley Lane and Woodland Road, with the Town of Rye and property owners adjacent to the north end of Old Locke Road, and with Abenaqui Country Club to report back to the Board of Selectmen on whether one of those alternatives should be pursued further by the Town to provide, at a minimum, emergency vehicle access to the isolated homes in the event of a flood. If one of the public access improvements is selected, the Town should contact FEMA to pursue potential grant funding for design and construction of those improvements.

The Town of North Hampton, its Conservation Commission, and the New Hampshire Coastal Program should consider a pilot program to install runnels at saltmarsh impoundments with the dual purpose of improving marsh vegetation and limiting mosquito propagation. This should be considered following the completion of the SLAB installation and the associated improved marsh drainage. Funding sources for such improvements should be sought. Any work in the marsh will require specific approval of the private property owner, as all of the marsh and pond areas are privately owned.

In the future, as the NH Department of Transportation considers improvements to Ocean Boulevard, its seawalls, and its drainage structures, consideration should be given to evaluating the adequacy of existing structural and rock pile seawalls in view of on-going storm experiences and future sea level rise, and reconstructing the Route 1A culvert to a: lower the invert elevation of the conduit on the west inlet in order to maximize diurnal tide level variations in Philbrick Pond, b: increase the culvert sizes to facilitate flow out of the pond after major precipitation events and, c: install a tide gate to be remotely activated and operated only in extreme storm surge events or astronomical high tides. All of those modifications are needed in the future and should be considered simultaneously. At that time, the removal of the trolley berm should be pursued, if property owner permission can be obtained. Fully resolving the flood risk to properties and maximizing marsh health would require the installation of a tide gate, the removal of the trolley berm, and the reconstruction of the Route 1A culvert at a lower elevation and with a larger opening size. Evaluating the hydraulics of replacing the Route 1A culvert was beyond the scope of this investigation and would need to be completed when such improvements are contemplated in the future.

The Design Solutions for Coastal Resilience projects were funded by NOAA’s Office for Coastal Management under the Coastal Zone Management Act in conjunction with the New Hampshire Department of Environmental Services Coastal Program.